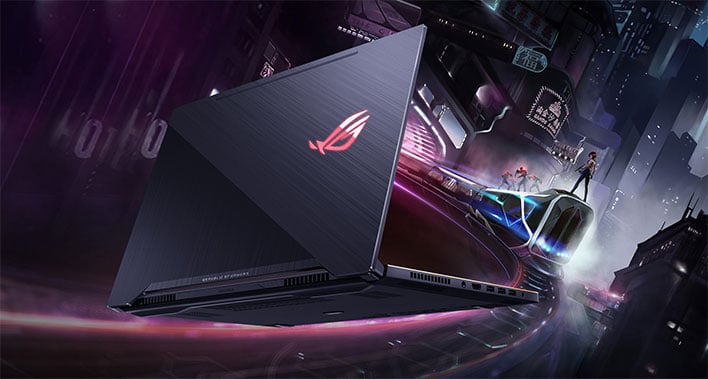 Ready, set...FIGHT! Well, not quite yet, actually—I'm jumping the gun a bit on the next-generation laptop wars that will pit Intel's upcoming Comet Lake-H processors against AMD's Ryzen 4000 series. It's going to be interesting to see how the dust settles. As we wait, the leaked benchmark scene is providing yet another glimpse of what is to come, this time in the form of a presumed ASUS gaming laptop with a Core i9-10880H processor inside.
I say "presumed" because even though the laptop is not labeled in the leaked 3DMark entry (fist bump to @_rogame for spotting the entry), the GPU section lists the vendor as ASUS. There are three possibilities (listed here in order of likelihood)...
The top possibility makes the most sense to me, but that's the nature of leaks—we never really know for sure, even when they come from reliable sources.
In any event, here's a look at the 3DMark listing...

According to the benchmark entry, the Core i9-10880H flexes 8 physical cores and 16 threads, with a 2.3GHz base clock and 5GHz boost clock. This is not the first time Intel's unreleased processor has made an early appearance. Based on prior leaks, it also sports 16MB of L3 cache.
As for the architecture, Comet Lake-H is another revision to Intel's 14-nanometer node. In basic terms, you can think of Comet Lake as a faster version of Coffee Lake. I'd need to see final, confirmed specifications to make a proper comparison, but as a point of reference, Intel's Core i9-9880H (Coffee Lake) is also an 8-core/16-thread processor with a 2.3GHz base clock, albeit a 4.8GHz boost clock.
Looking at the GPU in the above listing, the laptop (or mini PC) wields a GeForce RTX 2080 Super GPU. This is notable because a GeForce RTX 2080 Super in mobile form does not yet officially exist. According to the 3DMark listing, it has a 1,365MHz base clock and 8GB of GDDR6 memory (14Gbps).

I don't want to read a whole lot into the scores since (A) these are leaked numbers and (B) I can't be certain what exactly we are looking at. However, supposing this is an ASUS ROG laptop, the benchmark scores show a favorable jump for another leaked laptop with a GeForce RTX 2070 Super inside (note those are all GPU scores, not overall scores).
When will these next-gen parts arrive? There was a rumor that Comet Lake-H could arrive in mid-March, but that time has come and gone. It's hard to tell these days with the coronavirus pandemic impacting industries far and wide, so all we can do is sit tight and wait.