Windows 11 and Alder Lake are supposed to go pair well like cheese and wine or peanut butter and jelly. And they do, thanks to efforts by both Intel and Microsoft to ensure Alder Lake's hybrid architecture and Thread Director feature are fully utilized in the OS. But guess what? A recent update to the Linux kernel seemingly gives it a leg up against Windows 11 on Alder Lake.
Let's back up a moment. Alder Lake combines high-performance 'Golden Cove' P-Cores with power-efficient 'Gracemont' E-cores in the same package. The general idea is to have more performance on tap when needed, like when playing games or encoding, or any other CPU intensive task. In principle, it's not unlike Arm's approach, but obviously x86 is very different than RISC.
You may recall that before Alder Lake and Windows 11 launched, we tested a Lakefield chip (which also sports a hybrid makeup) on a pre-release build of Windows 11 and saw a notable performance improvement. Then during Intel's Architecture Day 2021 event, there was an ah-ha moment as to why. That's when Intel revealed its Thread Director feature.
Thread Director is a hardware level thread analyzer and scheduler that "provides runtime feedback" to the OS for optimal scheduling decisions with any workload. It also adapts to thermals, as well as load and power requirements on the fly, and works in conjunction with Windows 11. Lakefield sports a similar hardware thread management resource on board, which is why we saw a difference even before Alder Lake.
Long story short, Alder Lake and Windows 11 are ideally matched, with Thread Director making them a perfect fit. But here's where things get interesting. The same feature benefits Linux, and might do so even better than Windows 11 with the latest Linux kernel (version 5.16).

The folks at Phoronix ran a whole bunch of performance tests on a system with a Core i9-12900K processor, and benchmarked the platform in both Ubuntu 22.04 LTS and Intel's own Clear Linux OS with the latest 5.16 Linux kernel. The site also tested a few other platforms, including Windows 11 Pro 64-bit. 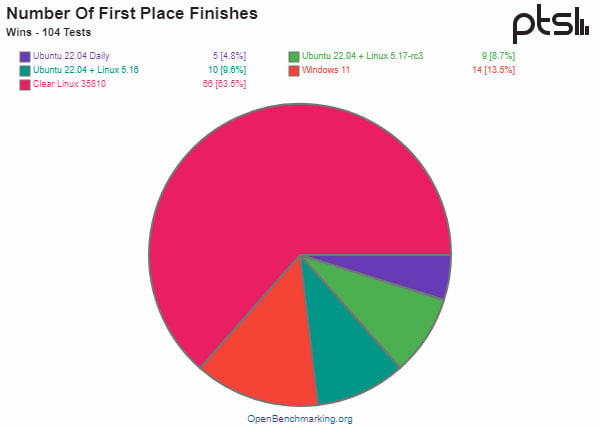 This was essentially a rematch between Windows 11 and Linux on Alder Lake. But whereas before Windows 11 returned the best results, Intel's reference Clear Linux platform dominated the battle royale. As you can see in the pie graph above, it turned in the best performance in over 63 percent of the 104 benchmarks the site ran.
Windows 11 came in second with 13.5 percent first-place finishes. On the flip side, Windows 11 finished in last place 37.5 percent of the time in the five-way battle royale, whereas Clear Linux finished last in just two tests (1.9 percent).
"Long story short, if running an Intel Alder Lake hybrid processor, the performance is looking far better on Linux 5.16+," the site wrote.
In case you're wondering, the rest of the system consisted of an ASUS ROG Strix Z690-E Gaming WiFi motherboard, 64GB (2x32GB) of DDR5-4400 RAM, and the onboard GPU. It's a meaty system (minus the GPU), and it evidently runs best on Linux 5.16, at least for the majority of productivity benchmarks that were tested.