Back in mid-July, Intel sent out a teaser asking the press to "drop in", as it would "have something big to share" on September 2nd. Given what we already know about Intel's processor roadmap, and what we've seen by way of leaked benchmarks (which have increased in frequency over the past few weeks), we reasonably surmised that Intel was talking about its next-generation Tiger Lake CPU architecture.

Intel has confirmed this hypothesis via an event calendar that is currently posted on its Investor Relations website. Right there under September 2nd, we see that Intel has penciled in its "Tiger Lake Virtual Launch Event". Unfortunately, clicking the "Additional Information” link doesn't give us any further details, but we already know pretty much everything about Tiger Lake based on leaked benchmarks. 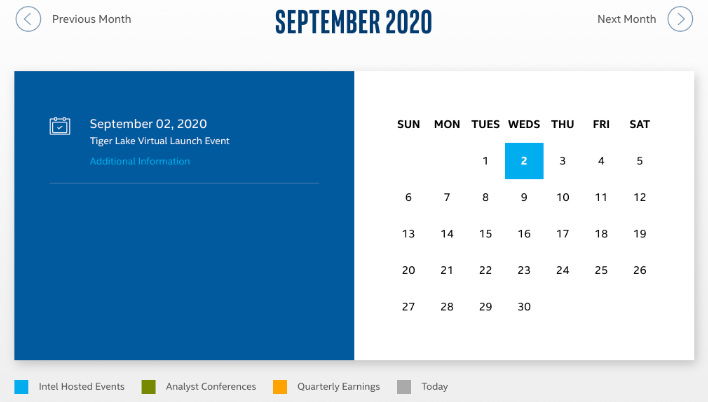 The processor we've seen most frequently is the Core i7-1165G7, which is a 10nm Tiger Lake-U processor that has a base clock of 2.8GHz and a boost clock of 4.7GHz. It's a 4-core/8-thread processor, and has shown some pretty strong performance in early benchmarks. It has been shown outpacing AMD's Ryzen 7 4800U by over 20 percent in single-threaded Geekbench results. More recently, we've seen additional single-threaded beatdowns from Tiger Lake in PassMark. AMD, however, still has the upper hand with multi-threaded operations and overall performance due to its more plentiful cores. 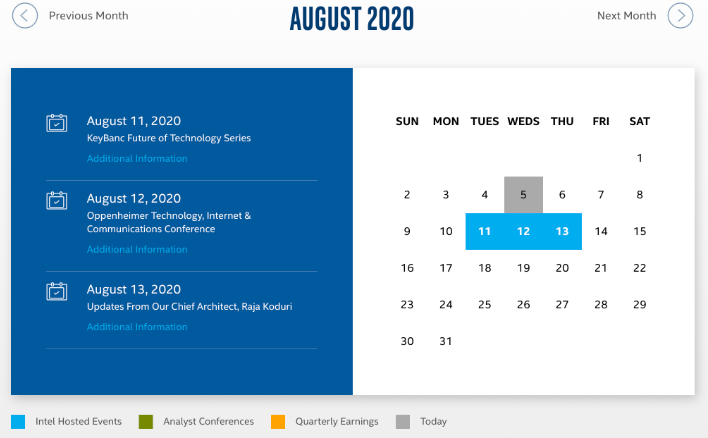 Besides the new Willow Cove CPU cores that are found in Tiger Lake, the new processors also bring along Intel's Gen 12 Xe graphics. Tiger Lake will be Intel's first outing for Xe, and it is promising a substantial uplift in performance compared to its Gen 11 GPU offerings.

One other event that we spied on Intel's calendar is scheduled for next week; August 13th to be exact. The event is simply scheduled "Updates From Our Chief Architect, Raja Koduri". As you know, Raja is in charge of Intel's graphics endeavors, and we expect to hear a lot more about its 12th generation graphics products, including Xe that will be included in Tiger Lake. It's likely that we'll also hear more about the company's standalone DG1 graphics card -- also Xe based – which was officially demoed earlier this year at CES 2020.