It was right around this time last year when Intel invited the public at large to join its discrete GPU "Odyssey," and to provide feedback on what kind of features and expectations the public was placing on the company's efforts. Clever marketing, sure, but Intel is indeed jumping into the discrete graphics space. As we await Intel's eventual launch, a listing in the SiSoft SANDRA database may provide certain details about one of Intel's Xe graphics solutions, and maybe DG1.

What exactly is DG1? In short, it's both a mobile graphics solution and a discrete graphics card based on Intel's Xe graphics architecture. Intel has not revealed many details about DG1, though it did celebrate having fired one up for the first time last October. At the time, Chris Hook, who was then Intel's marketing chief (Hook has since left Intel), wrote on Twitter, "It's alive!"
Twitter seems to be the happening place for Intel's efforts in the discrete graphics space, because now a few short months later, prominent leaker APISAK posted a link to the aforementioned SiSoft SANDRA database entry. 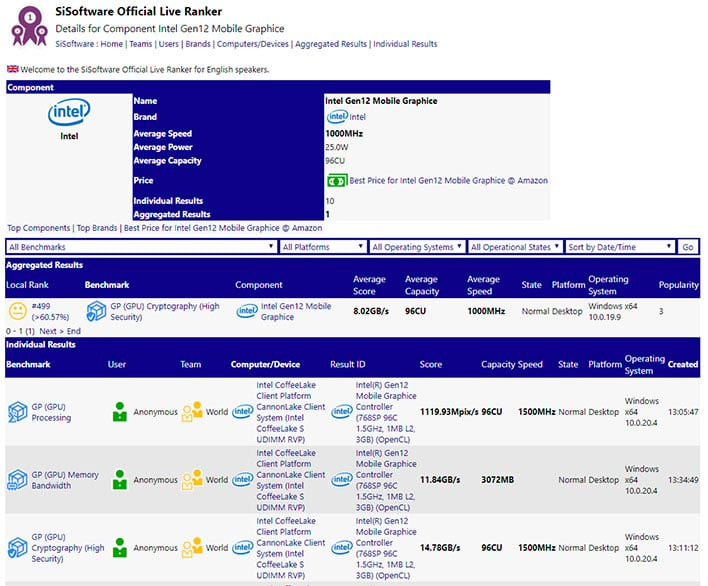 The listing references "Intel Gen12 mobile graphics," which on the surface could seemingly rule out DG1 in external form. However, it's tough to tell when it comes to leaks—SANDRA may or may not be reading things correctly. In addition, Intel recently showed off an upcoming Tiger Lake-based mobile platform with a discrete DG1 GPU running a game, and has seeded a new DG1 development kit to independent software vendors (ISVs).

There are some interesting specifications in the listing. Namely, it points to 96 compute units (CUs), 768 streaming processors, a 1.5GHz clockspeed, 1MB of L2 cache, and 3GB of memory. It also lists a rather scant 25-watt power envelope.
Are any of those specifications accurate? It's hard to tell at this early stage. As an added wrinkle, Intel told PCWorld last month that final hardware, software, and drivers for its discrete Xe graphics cards won't resemble what it's put in the hands of developers with the DG1 development kit.
That said, past rumors have pointed to DG1 having 96 CUs, and this leak aligns with that specification. So this could be an early look at finalized silicon (though it could just as easily not be).
We won't dive into the performance numbers, because we don't have our own SANDRA scores to compare against. In addition, these metrics can vary by version, which makes comparing SANDRA leaks tricky.
What we can say, however, is that there will be more powerful discrete solutions from Intel. Luke Larsen at Digital Trends recently claimed to have obtained parts of an internal presentation from Intel's datacenter division, which pointed to Intel's discrete GPUs having 128, 256, and 512 EUs, and up to a 500W TDP.
Hopefully we will have clarity very soon. Intel plans to launch its first modern discrete GPU products this year, though the company has not said exactly when.