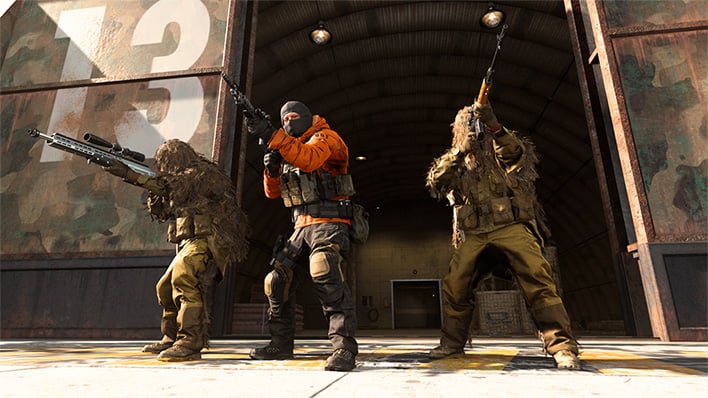 NVIDIA is pushing out a new 'Game Ready' driver for its GeForce GPUs (WHQL 456.55), and with it comes Reflex support for Call of Duty: Modern Warfare and Call of Duty: Warzone, along with optimizations for Star Wars: Squadrons. The GPU maker also claims its latest driver "improves stability in certain games on RTX 30 series GPUs" as well.
Consider yourself lucky if you managed to pick up a GeForce RTX 3080 or GeForce RTX 3090 (and have not been running into any issues with cheap capacitors). Those cards are in super high demand, and as a result, NVIDIA and its retail partners quickly sold out of initial inventories, leading to silly prices on eBay. More supply will come, of course, as well as other cards like the GeForce RTX 3070.
However, the real highlight here is Reflex support for Modern Warfare and Warzone (which we touched on in our review of the GeForce RTX 3080). With the latest driver installed and tonight's game update applied (Activision will make it available at 10:00 pm PT / 7:00 pm ET), users with GeForce RTX and GeForce GTX 900 series and newer GPUs can benefit from lower latency responses.
"With popular mid-range cards, like the GeForce GTX 1660 Super, gamers can expect up to a 33 percent improvement in PC responsiveness with Reflex. Add in a GeForce RTX 3080 and a 360Hz G-SYNC esports display, and gamers can play like the pros with the very lowest latency possible," NVIDIA explains.
What's the big deal? Latency is a measurement of delay in certain actions and responses. In gaming, this could manifest as a delayed hit confirmation, potentially resulting in wasted ammo as a quick-triggered player fires more rounds, or delayed interactions with world objects, like opening doors or looting chests. There is also system latency at play, which applies to how long it takes for a mouse click or keyboard press to show up on screen.

NVIDIA's article on its Reflex technology takes a deeper dive into the technology, but to the point, it aims to make players more effective gamers in twitch titles. The general idea is to enable gamers to react to enemies faster, in games that implement support for Reflex (it is headed to Apex Legends, Destiny 2, and a bunch of other games, NVIDIA says).
This is also being implemented into certain high-speed 360Hz G-Sync monitors, as far as being able to see and analyze real-time latency figures. Same goes with certain mice—Reflex works with all mice, but certain compatible models from Asus, Logitech, and Razer up the ante by measuring full peripheral latency and full end-to-end system latency, when plugged directly into a supported monitor. Neat stuff.
The latest driver is available through NVIDIA's GeForce Experience software, or you can head to NVIDIA's driver download page and grab it.