NVIDIA hit it out of the ballpark with its GeForce RTX 3080, a $699 graphics card that beats the previous generation offerings to a pulp, including the GeForce RTX 2080 Ti that launched at $999. Sounds great, right? The only problem is trying to actually get your hands on one. Predictably, the GeForce RTX 3080 pretty much sold out right away, leading to inflated prices at places like eBay.
Sales of the card went live this morning at 9:00 am ET. And by 9:01 am ET, they were gone...everywhere. Demand for the card was so high some retailers buckled under the pressure of immense traffic, including Newegg, which was down for a bit (it's back online, but none of the GeForce RTX 3080 models on its site are in stock).
About the only way to get a GeForce RTX without paying a huge premium is by picking up a pre-built system. Newegg has a couple. One is the ABS Gladiator with a Core i7-10700, 16GB of DDR4-3000 RAM, 1TB M.2 NVMe SSD, and GeForce RTX 3080 for $1,899.99. The other is a higher end ABS Gladiator config for $2,299.99 with a Core i9-10850K, 32GB of DDR4-3200 RAM, 1TB M.2 NVMe SSD, and GeForce RTX 3080.
It's not just online sales, either. Hearkening back to the days of long lines for new Apple products, Twitter user @breadforcongres posted about their experience waiting outside a Micro Center for several hours. They said the store only had 15 units available, and that someone offered them as much $300 for their spot in line. Wild stuff. 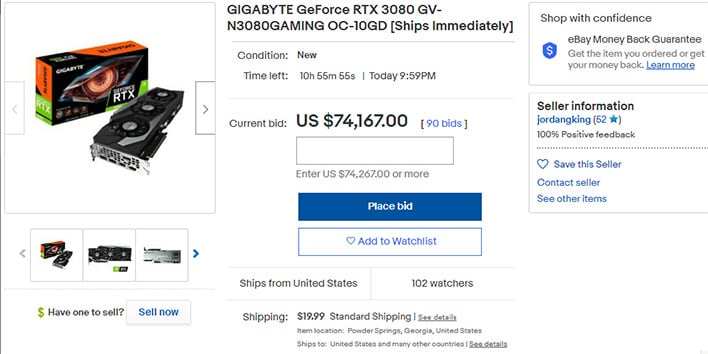 The situation is even more wild on eBay. GeForce RTX 3080 listings have flooded the auction site with jacked up pricing. There is even one listing where the high bid (at the time of this writing) is north of $70,000. That is obviously the result of shenanigans (I would hope so, anyway), but you can bet that some cards are legitimately selling for way above MSRP.
Simply put, this is a massive bummer for PC gamers who were hoping to score a GeForce RTX 3080 at launch. It may have always been an unrealistic expectation, but disappointing all the same. We have seen this kind of situation before, just usually with game consoles (note that PlayStation 5 pre-orders are all gone as well). Ideally, NVIDIA will work feverishly to ramp up supply to meet demand, but who knows how it will play out.
At least Oculus Quest 2 preorders are still available...