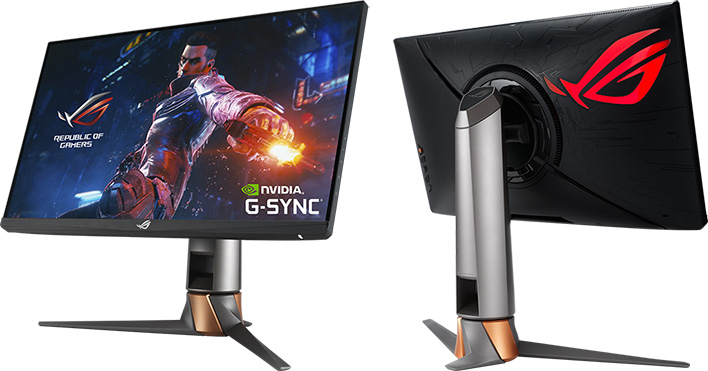 Your monitor might be fast, but it's not 360Hz fast. There is only one monitor on the planet that is capable of hitting such an insanely high refresh rate, and that is the ASUS ROG Swift PG259QN, which is slated to arrive next month. For gamers craving pure, unadulterated speed, the PG259QN is as fast as it gets (at least for the time being).
Whether you can actually benefit from such a high refresh rate is another matter entirely. When it comes to gaming, the refresh rate does matter, and anything less than 60Hz is not that great. Where ultra-high refresh rates come into play, however, is when playing fast-paced, competitive games, particularly in the esports arena. Games like Counter-Strike: Global Offensive and Fortnite.

"In a world where milliseconds count, the blazing-fast 360 Hz refresh rate is the difference between victory and defeat. In the world of competitive sports, a 4 percent difference is a game changer. To put this into context, in the 2016 Summer Olympics, 1 percent determined the difference between silver and gold in both men's and women's 100m and 200m dashes," ASUS explains.
It's an interesting but flawed analogy, borrowed from NVIDIA. Unlike the 100m and 200m dashes, playing competitive shooters is not a race to the finish line. And even if if that was the case, a higher refresh rate shouldn't affect how long it takes to get from point A to point B, only how smoothly the action appears on screen. There is a benefit to that, which NVIDIA is quick to point out.

"Counter-Strike: Global Offensive, Rainbow Six: Siege, Overwatch, and Fortnite are just a few of the competitive games that can achieve 360 FPS on GeForce RTX hardware, enabling gamers to take full advantage of the new 360Hz displays, and to benefit from the improvements our research found," NVIDIA explains.
In any event, you can dive into the refresh rate rabbit hole as deep as you want, starting with NVIDIA's research into the matter.
NVIDIA's interest in this monitor stems from two parts: it's about to launch a new generation of consumer graphics cards based on Ampere (Asus also has new cards in the pipeline, based on RDNA 2), which are rumored to deliver big improvements in rasterized and ray-traced rendering, and the PG259QN sports a G-Sync module.

The PG259QN is a 24.5-inch monitor with an IPS screen, 1920x1080 resolution, and 1ms gray-to-gray (GtG) response time. So in theory, it should deliver high quality visuals (IPS displays generally offer better image quality than TN screens), in addition to be blazing fast.
This is also an HDR monitor, though the max brightness 'only' gets to 400 nits. That's fine for regular content, but well short of the ideal 1,000 nits peak brightness level that really does HDR content justice on an LCD screen.
ASUS is backing this monitor with a 3-year warranty and says it will be available in September for $699.