G.Skill is adding to its growing collection of high-speed DDR5 RAM for Intel's Alder Lake and AMD's soon-to-be-released Zen 4 platforms. The memory maker's latest offerings include a 64GB (2x32GB) Trident Z5 RGB DDR5-6400 kit and a class-leading 32GB (2x16GB) Trident Z5 RGB DDR5-6800 RAM kit, the latter of which will put G.Skill in sole possession of the DDR5 speed crown.

If you look around the landscape right now, the fastest DDR5 memory that's actually available to purchase is DDR5-6400, with G.Skill, Corsair, and GeIL sharing the throne. According to G.Skill, however, both of its new kits will be available next month, at which point it will be the only one offering DDR5-6800 RAM to consumers. That is, unless the competition comes out with kits that are equally fast or faster in the next few weeks. 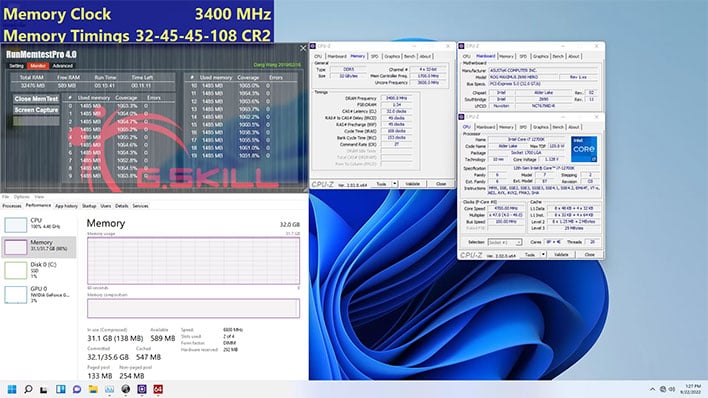 As has been the case, faster transfer rates come at the expense of higher latency timings. G.Skill's DDR5-6800 kit plays fast and loose, hitting 6,800 MT/s at CL32-45-45-108. Meanwhile, the 6,400 MT/s kit has its timings set at CL32-39-39-102. For both memory kits, G.Skill validated the speed and latency timings on an Intel platform consisting of an ASUS ROG Maximus Z690 Hero motherboard and 12th Gen Core i7-12700K processor.
There's no mention of pricing for either kit, which is typical—we've reached out to G.Skill in the past in attempts to extract MSRPs, and the company told it us the reason it doesn't provide pricing is because the memory market is always fluctuating. Fair enough.
That said, here are some points of reference...
64GB memory kits in the 6,400+ MT/s range are much harder to find. Nevertheless, the above gives you an idea of where pricing stands in the upper echelon, so suffice to say, G.Skill's new kits will undoubtedly command a premium.
Pricing aside, it's good to see memory makers pushing faster speeds in DDR5 territory. There's been chatter of DDR5 scaling to 10,000 MT/s and beyond. Such high transfer rates are strictly in the realm of overclocking (MSI hit 10,000 MT/s a with a Kingston Fury Beast kit) at the moment, but just as we saw with DDR4 over time, DDR5 will continue to hit new highs.