As time goes on, we can expect memory makers to release DDR5 kits with increasingly higher data rates, as well as lower latencies. In fact, it's already starting to happen. Corsair has added a DDR5-6400 Dominator Platinum RGB memory kit to its lineup, which is faster than anything you can buy on Amazon or Newegg right now.
DDR5 is new to the consumer sector and so it will take some time for the market to flesh out. As things stand, Newegg's selection of DDR5 memory kits span DDR5-4800, DDR5-5600, and DDR5-6000 kits and and modules (there are less than two dozen listings currently). The same appears to be true for Amazon (it's just a little easier to sort Newegg's products).

Corsair is not the first to announce a DDR5-6400 product, though. As far as we know, that distinction belongs to TeamGroup. However, Corsair is the first to actually bring a DDR5-6400 RAM kit to market. It's not as zippy as G.Skill's DDR5-6800 kit, but Corsair's 32GB (2x16GB) DDR5-6400 memory kit is "available immediately" on the company's webstore for $559.99, with a limit of one per customer. 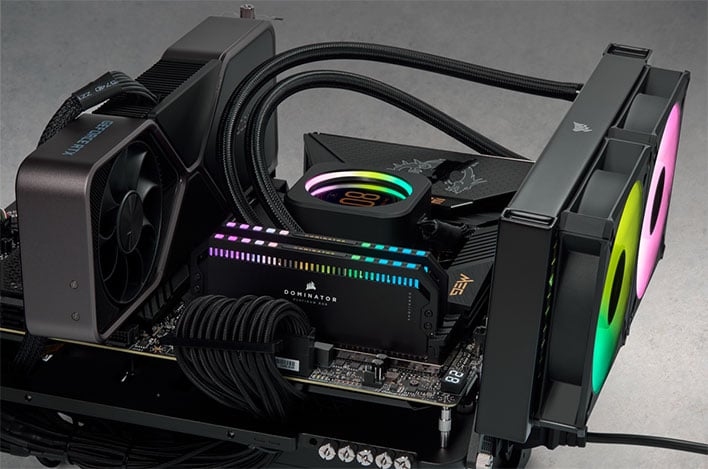 DDR5 modules are in short supply, even with its limited application. At present, Intel's Alder Lake platform is the only consumer one to support DDR5. It also supports DDR4, depending on your motherboard selection.
In any event, this is a high-end kit with fast throughput and customizable RGB lighting (through Corsair's iCUE utility) with 12 "ultra-bright" and individually addressable LEDs on each of the two modules. There might also be some overclocking headroom to tap into.
"With the DDR5 generation, overclocking enthusiasts are smashing previous speed limits with the help of Corsair modules. In November, overclocker David Miller, aka mllrkllr88, set a new record level of speed for Corsair DDR5 memory by reaching a speed of 8,149MT/s when cooled with liquid nitrogen," Corsair says.
Obviously the use of LN2 brings a whole other dimension to overclocking, and Corsair isn't advertising speeds above 6,400MHz. But those kinds of results in the enthusiast sector do suggest the use of premium chips (albeit also cherry-picked ones).
Other than availability, the caveat here is the pricing premium. Not only is DDR5 more expensive than DDR4, but Corsair's high-speed DDR5-6400 kit is almost twice as much as the MSRP for some DDR5-4800 kits.