Google Tensor: Everything We Know About Google's AI Workload Crusher

Google today launched its newest flagship Pixel phones, and we've already posted a Pixel 6 and Pixel 6 Pro guided tour with a handful of photos, a hands-on video, and loads of specifications and features to digest. During today's event, Google also shared some more details about Tensor, and what it aims to achieve. Benchmark wins are not necessarily one of the goals, though this is still an interesting chunk of silicon.
For its first-ever mobile chip designed in-house, Google is hanging its hat on machine learning/AI capabilities. Enabling new experiences was purportedly the main reason why Google embarked down this road, rather than tapping a third-party, as it has always done in the past.
"We approached Tensor differently. Every aspect of Tensor was designed and optimized to run Google's ML models," Google Product Manager Monika Gupta said during today's Pixel 6 launch event. "This permeates our entire chip. We're fortunate to have great insights when it comes to ML, and built our chip based on where ML is heading, not where they are today."
As part of the presentation, Gupta said mobile chips have not always been able to keep up with Google Research, hence why Tensor exists. She also noted that "peak CPU and GPU speeds look great in benchmarks, but they don't always reflect real-world user experiences." This suggests to us that Tensor is not going to dethrone the competition in popular benchmarks, but we'll have to wait and see until we can put the chip through its paces. 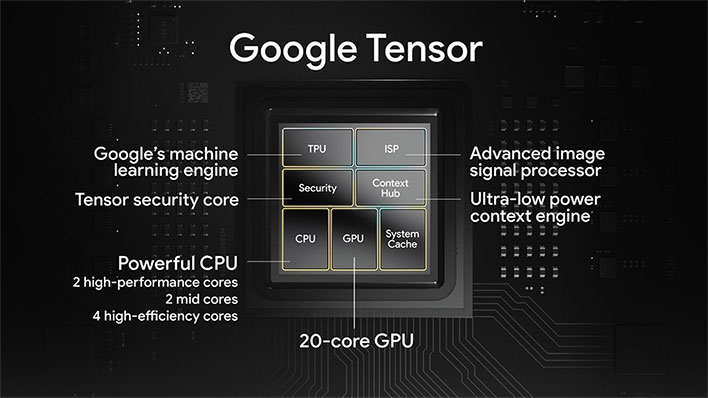 Let's look at the makeup of the chip. There are multiple parts, each with different jobs. Google confirmed the CPU is comprised of a 2+2+4 configuration, with two main cores being Arm Cortex-X1 parts. Past rumors pegged Tensor as being a sort of hybrid variant of Samsung's Exynos 2100 silicon, and while Google didn't go into more detail about the CPU cores, we suspect it's outfitted with a pair of Cortex-A78 cores (the "mid cores) and four Cortex-A55 cores ("high-efficiency cores").
The TPU you see in the upper-left is Google's integrated ML engine, which was custom designed by Google Research, for Google Research, the company says. There's also an ISP with "key algorithms directly in the silicon for power efficiency," and a Context Hub to shift certain chores to the ultra-low power domain (like an always-on display).

While Google appears to be downplaying benchmark performance, it's not completely overlooking raw performance, either. The company claims the Pixel 6 delivers an 80 percent gain in CPU performance versus the Pixel 5, and a massive 370 percent gain in GPU performance. The GPU, by the way, is a 20-core part.
Part of the focus towards ML performance and capabilities is aimed at photography. For example, Google's new Magic Eraser feature is touted as being able to analyze scenes and quickly remove unwanted content from photos, like people and objects in the background. The demonstrations looked impressive,  though our experience with Photoshop's similar feature tells us the effectiveness will inevitably vary, depending the scene. Still, that kind of functionality in a smartphone is nice to have.
The Pixel 6's cameras will also work together to intelligently fix blurry photos, and much more. And outside of photos, ML will facilitate more accurate speech recognition, translate speech and text, and so forth.
"Google Tensor allows us to push the limits of helpfulness in a smartphone, taking it from a one-size-fits-all piece of hardware into a device that’s intelligent enough to respect and accommodate the different ways we use our phones," Google says.
From everything Google shared about Tensor today, it's certainly a promising chip, even if it ultimately doesn't light up the benchmark charts. But we'll have to wait and see once we've had a chance to test out the Pixel 6 and Pixel 6 Pro. So, stay tuned folks.