After several early teasers, Samsung has officially unveiled its next-generation Exynos 2100 SoC. As we previously reported, Samsung jettisoned its custom, in-house Mongoose cores this time around, and is instead going with the stock Arm designs.

Samsung's custom cores in practice haven't been able to keep up with what Qualcomm has offered year-after-year, so perhaps this move to a more "reference" design will bring performance more in line with what the Snapdragon 888 is currently able to offer.

Given Samsung's design direction, it should come as no surprise that the Exynos 2100 looks quite familiar to the Snapdragon 888 with regards to specs. At the heart of the SoC is an Arm Cortex-X1 prime core running at 2.9GHz, which is flanked by three Cortex-A78 high-performance cores. There are also four Cortex-A55 efficiency cores to handle more menial tasks. This is a similar layout to the Snapdragon 888, although its prime core is clocked slightly lower at 2.84GHz. 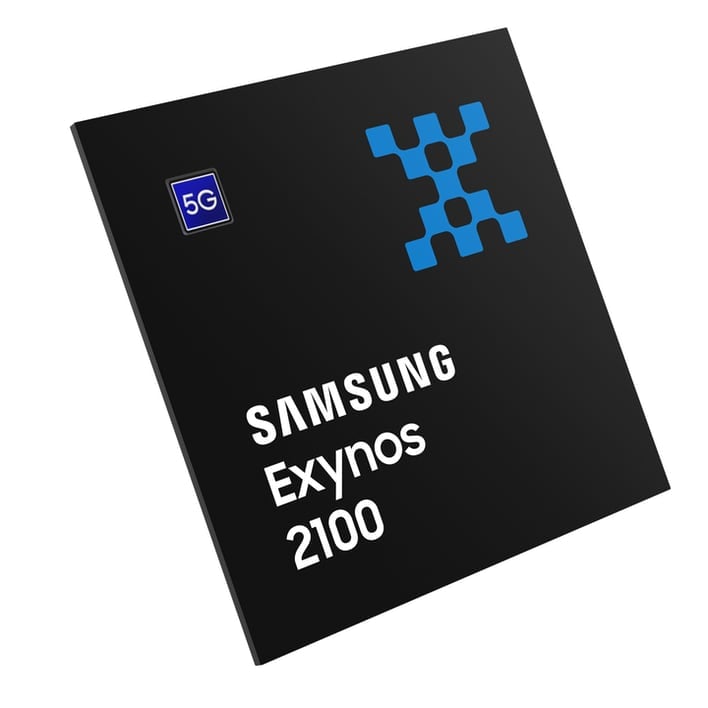 The Exynos 2100 is built on Samsung's on 5nm EUV process tech, and can deliver either a 10 percent uplift in performance or a 20 percent reduction in power consumption compared to the Exynos 990. Likewise, the Mali-G78 GPU provides a 40 percent boost over its predecessor.

Also housed within the chip is a tri-core neural processing unit (NPU) that can deliver 26 TOPS of compute performance (power efficiency has doubled). Given that cameras are becoming even more important on our smartphones, the Exynos 2100 can support cameras up to 200MP (Samsung has already cracked the 100MP threshold and is aiming even higher with its image sensors), and can support up to six image sensors. In addition, Samsung says that its ISP is capable of processing data from four image sensors simultaneously.

Tying things together is one of Samsung's own integrated 5G modems, which supports both sub-6GHz and mmWave spectrum (and is of course backwards comparable with 4G LTE and older technologies). Downlink speeds top out at 7.35Gbps/5.1Gbps (mmWave/sub-6GHz) and at can hit up to 3Gbps on 4G.

According to Samsung, the Exynos 2100 is already in production, and we're likely to hear more about its on January 14th at the Galaxy S21 announcement. It's expected that while the United States market will get Galaxy S21 smartphones with the Snapdragon 888, most global markets will get the Exynos 2100. So, we'll be interested in seeing how performance stacks up between the two SoCs with all other things being equal. It's also likely that the Exynos 2100 will also find its way into other flagship mobile devices like Samsung's Galaxy Tab family, but we'll just have to wait and see on that front...