In an unprecedented move, NVIDIA "unlaunched" the "GeForce RTX 4080 12GB," leaving the extant GeForce RTX 4080—based on GA103, with 16GB of memory—as the singular GeForce RTX 4080 model. This was done pretty late, though, and those chips and even cards were already manufactured. It's a given that NVIDIA will re-launch the product, reportedly as the GeForce RTX 4070 Ti.

Those rumors might well be considered confirmed now thanks to an EEC filing by Gigabyte (spotted by @harukaze5719) that seems to list numerous models of the GeForce RTX 4070 Ti. This kind of filing is similar to a trademark application, although unlike a trademark, the filing lists individual products that will be sold.

All of these names should be familiar to enthusiasts that are aware of Gigabyte's general GPU lineup. The Aorus cards will be the top-end models, the GAMING series will serve the upper-midrange, the AERO series will be stylish and economical, and the EAGLE family will be the entry-level variants.

Gigabyte also did a separate filing for Radeon cards based on Navi 31, both RX 7900 XTX and RTX 7900 XT models. It looks like we'll be seeing seven new red-team cards; three based on the Radeon RX 7900 XT and four based on the RX 7900 XTX.


Unfortunately, these filings don't tell us anything about when these cards are actually coming, nor the pricing. We expect the Radeon cards to come in at or slightly above AMD's recommended pricing, but we have no clue what the GeForce RTX 4070 Ti will cost. NVIDIA's original price for the part was $899. That's a lot lower than the $1199 pricing of the "real" RTX 4080, but it remains to be seen how the newly-christened card will hold up against AMD's Navi 31 assault. 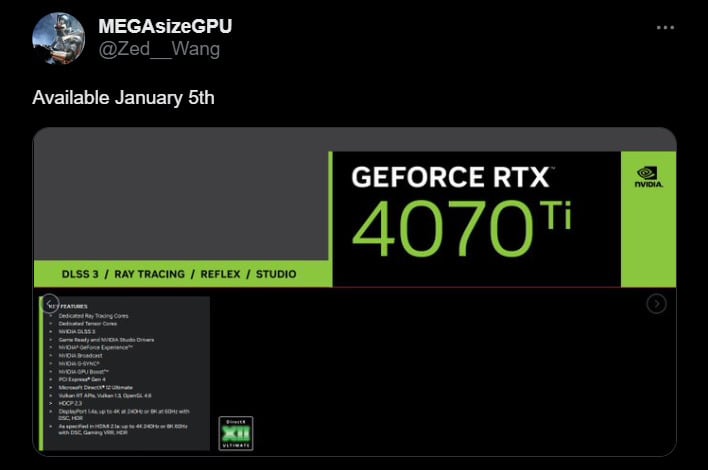 As far as the release date, the usual cadre of Twitter leakers seem to expect the RTX 4070 Ti to appear in the first week of January. That would make it very likely for a CES launch. While "CES 2023" probably sounds like it's still a long time away, it's barely more than a month from now, so we don't have long to wait to see how things will play out.