If you haven't been following the Ada Lovelace GPU rollout news very closely, the mention of the next card being an RTX 4070 Ti may come as a surprise. NVIDIA originally announced three graphics cards for its GeForce RTX 40 series: the RTX 4090, which has been available for some weeks (MSRP $1,599); the RTX 4080 16GB, which is due to launch in less than a week's time (MSRP $1,199); and the RTX 4080 12GB, which was also due later this month (MSRP $899).
However, NVIDIA controversially unlaunched the RTX 4080 12GB as it was deemed to be "a fantastic card, but it's not named right." The fact is that the lower rung RTX 4080 didn't just have a lesser memory quota with inferior bandwidth, the GPU was also scaled back (fewer GPU, RT and Tensor cores). In brief, the smaller RTX 4080 was too far behind its bigger brother.
After the news of the unlaunching, enthusiasts quickly started theorizing what would happen with the old RTX 4080 12GB products. NVIDIA had left its unlaunch so late that manufacturing partners had already put resources into branding, packaging and so on. Most thought, for minimum partner friction, nothing would change regarding the unlaunched RTX 4080 12GB specs, and the physical product would simply be rebranded as an RTX 4070 of some kind. 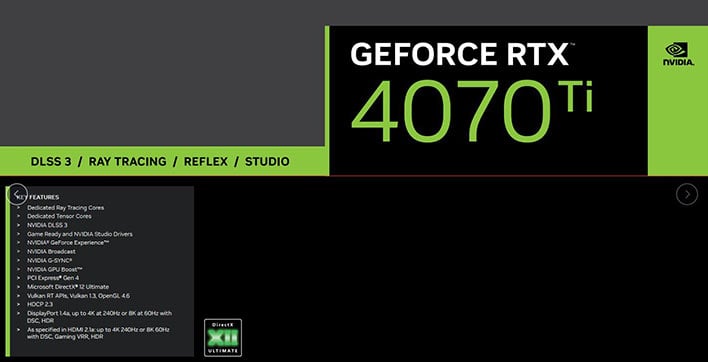 A few hours ago, Twitter's @Zed_Wang shared what he claims to be the GeForce RTX 4070 Ti's launch date. Interestingly, he also shared the packaging sleeve artwork you can see above. The artwork is nicely detailed, but it doesn't mention the actual specifications in terms of GPU, memory and other key configuration data. This raises the possibility that what we are seeing will be stuck over old RTX 4080 12GB boxes, saving waste / recycling efforts. With this sticker applied, and perhaps one or two more, the rest of the packaging can stay as-is, including the spec list. This solution has the potential to be messy, but less wasteful than some other choices. 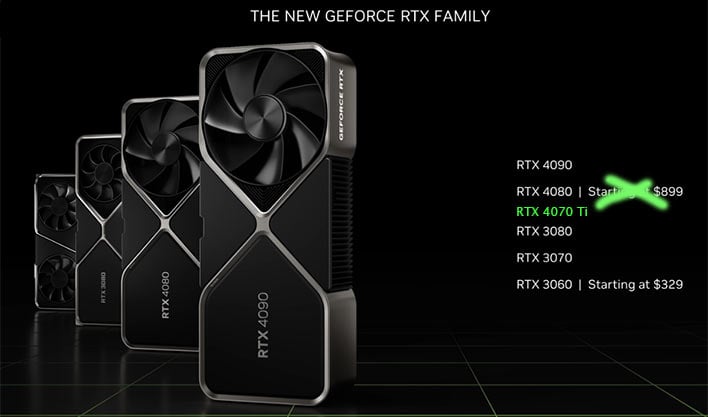 While we think that the new RTX 4070 Ti will carry the same specs as the unlaunched RTX 4080 12GB, we are hoping the pricing more closely reflects a slightly lower tier product. Could the misjudged $899 product be reduced $100 to $799? We will have to wait until nearer the purported launch date to find out.