The GeForce RTX 4080 will come in two flavors when it launches next month. Given that the just-released RTX 4090 is too rich for the blood of most folks, everyone's been wondering how its smaller siblings compare. Well, the only people who can tell you that right now are at NVIDIA, but fortunately, they've done just that. As part of an article promoting DLSS 3, the company produced some new numbers for the GeForce RTX 4080 cards.

There are four games in NVIDIA's article with new performance data: Microsoft Flight Simulator, F1 22, A Plague Tale: Requiem, and Marvel's Spider-Man Remastered. If those titles look familiar from RTX 4090 coverage (including our own), it's because they're all titles that support DLSS 3 Frame Generation. After all, the point of the article is to promote DLSS 3.

We have to commend NVIDIA, though, because the company is completely forthright with its data. The performance of the cards with and without DLSS is clearly-marked—although we would have liked to have seen data for DLSS 2 on the new cards, since there are many games that support DLSS 2 and not DLSS 3. Without further ado, let's check out the data. 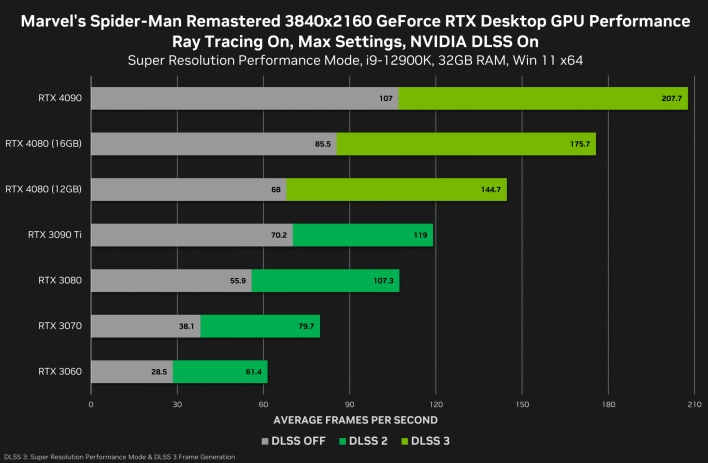 In Marvel's Spider-Man Remastered, we see both cards delivering non-DLSS performance in a range that we would call "RTX 3090 Ti-like." The RTX 4080 12GB card comes in ever-so-slightly behind the 450-watt Ampere monster, but that's hardly "bad performance." The more notable thing here is how far it is behind the RTX 4080 16GB model. That's kind of a trend, as you'll see. 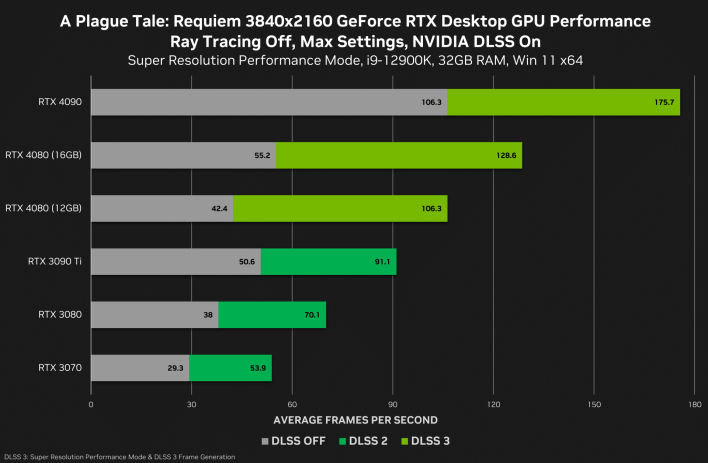 Games like A Plague Tale: Requiem are in an unusual place. It's not exactly an indie game, but it's also not a AAA game. There used to be a thriving A-game and B-game market, but just like the rest of society, things have polarized into the high and low. The last-gen cards do better here, with the RTX 4080 12GB card falling more squarely behind the RTX 3090 Ti, while the RTX 4080 16GB only barely outruns it without DLSS. 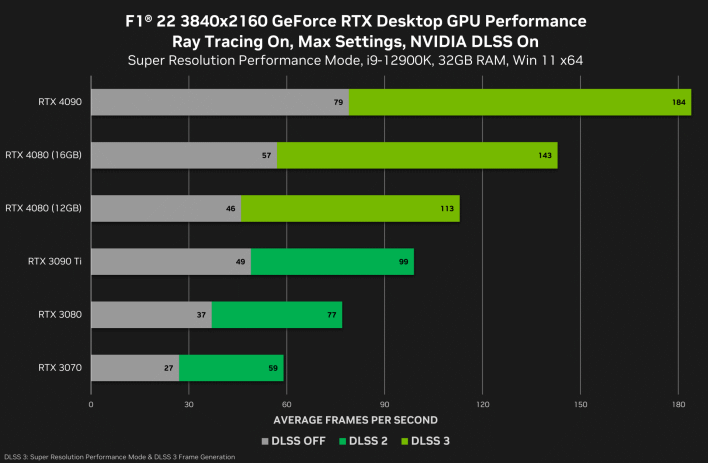 In racing simulator F1 22, performance is more similar to that of Spider-Man's. As expected, the RTX 4080 12GB card gains more from DLSS 3 than the older cards gain from DLSS 2, but it's still not running far ahead of the RTX 3090 Ti—and well behind its 16GB RTX 4080 sibling, especially with DLSS on. 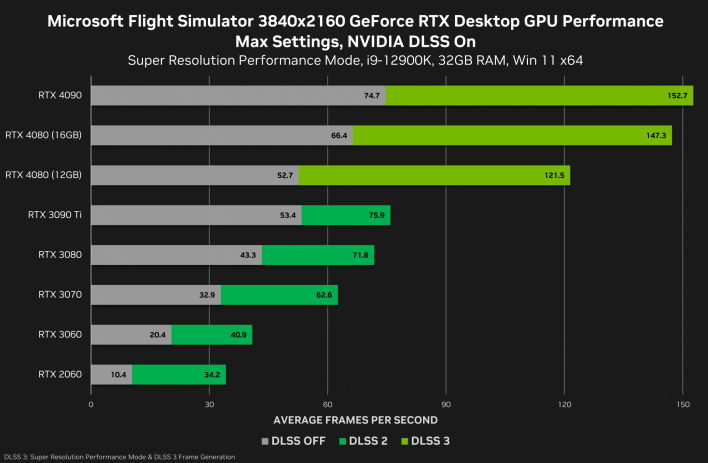 Finally, in MS Flight Simulator, we see the new cards hold their own without DLSS, and absolutely demolish the competition with DLSS 3. This is completely expected, as the greatest benefit of DLSS 3 is its ability to work past CPU bottlenecks. Flight Simulator is infamously CPU-limited even on top-end machines like the Core i9-12900K that NVIDIA used for testing, so DLSS 3 shows the biggest benefit here.


The rest of NVIDIA's post is a summary of new and upcoming games that are getting either ray-traced effects, DLSS, or both. However, most of the games listed are getting DLSS 2. If you've got a brand new RTX 4090 and are itching to try a game besides the above, Chinese MMO Justice, indie FPS Bright Memory: Infinite, and Rogue-lite platformer Loopmancer are the other three games getting DLSS 3.


Team Green would probably prefer that we focused this news post on the benefits of DLSS 3. To be sure, NVIDIA's frame-generation technology, which we've already covered in detail, is pretty amazing. (If you'd like more info, you can watch the video above.) Still, The more interesting part of the story for us is really the performance differential between the two models of "RTX 4080" card.

We've also already written reams about the nomenclature, as have other outlets, so we won't go on about it again here. Still, these benchmarks really serve to highlight the difference in the two parts despite both being named "RTX 4080." On the other hand, it's very easy to look at these benchmarks—even without DLSS—and say that circa-RTX 3090-performance for $900 is a fair deal. Naturally we'll have to put these parts to the test to make a final conclusion, so look out for that next month.