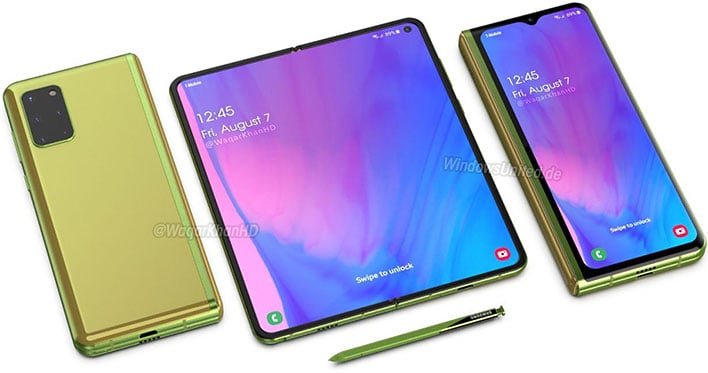 We're roughly a month away from Samsung's next big "Unpacked" event, and the electronics giant is expected to launch a number of new products including the successor to the original Galaxy Fold. A new report is suggesting that Samsung is changing up the naming convention of the new device, and will call it the Galaxy Z Fold 2.

That name doesn't exactly roll off the tongue with ease, but does align the new smartphone with the Galaxy Z Flip that launched earlier this year. According to SamMobile, this shift also meshes with comments from a Samsung spokesperson during the launch of the Galaxy Z Flip. At the time, the representative indicated that the "Z" moniker was chosen because “it intuitively communicates the idea of a fold while delivering a dynamic, youthful feel.”

It would also be in keeping with Samsung's other product families. Samsung uses "Galaxy S" for its mainstream smartphones, while "Galaxy Note" is applied to its flagship smartphones with S Pens. Likewise, "Galaxy Tab" is used for the company's Android tablets. “Galaxy Z” appears to be path forward for what will likely be an expanding family of folding smartphones.

The Galaxy Z Fold 2 is expected to feature a larger 120Hz 7.7-inch primary folding display versus the 7.3-inch display found in its predecessor. The exterior Cover Display is also going to dramatically increase in size. Inside, expect a shift to Qualcomm's Snapdragon 865 SoC (or the rumored Snapdragon 865+) and at least 16GB of RAM (up from 12GB on the current-generation). 5G support will continue to be included, although this year those duties will be handled by the Snapdragon X55 (instead of the Snapdragon X50).

Samsung's latest foldable will be sharing the stage in August with the Galaxy Note 20, Galaxy Z Flip 2, and the Galaxy Watch 3.