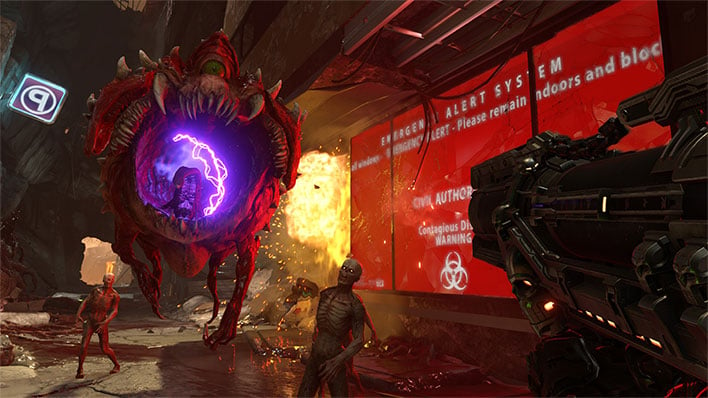 Forget all about Crysis, the new question is, can your PC run Doom Eternal...at 1,000 frames per second? The answer is no, it cannot, though not from a lack of technical capabilities on the software side. If you have the necessary hardware—and you don't—you could run Doom Eternal at quadruple-digit framerates.
This is one of the highlights in shifting from id Software's id Tech 6 graphics engine to iD Tech 7. In doing so, Doom Eternal can essentially as fast as your hardware permits, which for ultra high end setups would be triple-digit framerates.
"On id Tech 6, we maxed it out to 250 frames per second. This game, if you have the hardware right, it could hit 1,000 frames per second. That's the max we have," Billy Khan, id Software's lead engine programmer, told IGN in an interview.


Kahn notes that "speed is the one of the most important things" and that "there's really no upper limit." Whether Doom Eternal stands the test of time remains to be seen, but in terms of its technical capabilities, there is a bit of future proofing underneath the hood.
"For people who have 144Hz monitors, or even the new monitors that you'll see coming out that are even above that, going forward, this game will hold up for many years and it will give you really amazon opportunities to leverage that hardware," Kahn said.
Indeed, today's monitors top out at 280Hz (overclocked from 240Hz) courtesy of the ASUS TUF Gaming VG279QM, and there are 360Hz monitors in the pipeline (ASUS ROG Swift 360). Beyond that, who knows how far refresh rates will go.
As for the gameplay, id Software previously said Doom Eternal is the best game it's ever made, which is a pretty bold statement. It's also a much bigger game, checking in at twice the size as the 2016 Doom reboot.
Doom Eternal launches on PC, Xbox One, and PlayStation 4 on March 20, 2020. Sometime later, it will also launch on the Nintendo Switch.