It was with great disappointed that I wrote in October of last year about Doom Eternal's release being delayed until 2020, as it was originally intended to launch on November 22, 2019 amid much hype. Developer id Software opted to hold off a little bit longer to apply "speed and polish" to what will ultimately be the end result. Will the wait be worth you? Hell yes it will, if going by id Software's latest claim.
The developer has been allowing various media outlets to sample the game ahead of its March 20, 2020 debut across several platforms (PC, PlayStation 4, Xbox One, Nintendo Switch, and Stadia). And in speaking with Gillen McAllister, an author of the PlayStation blog, id Software promised Doom Eternal is "the best game we've ever made."
That's a bold statement, and one that might very well be true. Just check out this latest trailer and see if it gets you as hyped as id Software is about the game...

Doom Eternal is the fifth main title in the Doom series, and a sequel to the 2016 Doom reboot. Marty Stratton, executive producer of Doom Eternal, told McAllister that id Software learned from some of the mistakes that were made with the Doom reboot and made a concerted effort to address them in the upcoming game.
Part of that will entail a much bigger game—it will be twice the size as the reboot. However, Stratton concedes, "More isn't enough." Doom Eternal will bring about a lot more variety.
"We’re always introducing something new, even in the game’s later stages: new enemies, new mechanics, new visuals. You’re doing things you haven’t ever done in a Doom game before. It’s hard to get up from," Stratton explains.
The core gameplay will consist of tearing demons apart with fast-paced action that will test your reaction time. Tactical decisions will be elevated in Doom Eternal, though, as players will have to decide how to kill an enemy to reap the appropriate rewards. For example, a chainsaw kill earns the player ammunition, while frying a demon with a flamethrower yields more armor. 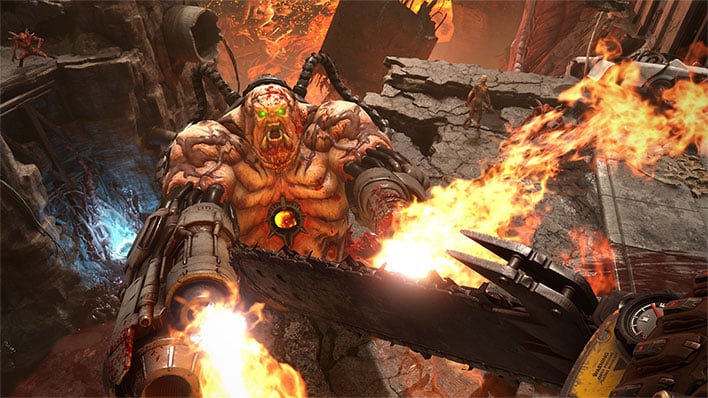 On top of those choices, players have to balance availability. Chainsaws require gas and flamethrowers take some time to recharge.
McAllister's hands-on time with the game resulted in some interesting observations. He says there is an "increased verticality to levels" that found him climbing up shattered land masses and "leaping down into car parks turned valley floors due to earthquakes."
"There are also environmental dangers to contend with. I experience first-hand fire-belching pipes that complicate a vertical ascent and elsewhere demonic walls that spit flame down mall corridors, forcing to me dodge into store fronts and use mannequins as cover," McAllister says.
For those who want a hellish challenge from the get-go, Ultra-Nightmare mode will be available from the start. In the Doom reboot, players had to beat the game to unlock that mode, which challenges them to play through without dying. And on the flip side, there is an Extra Lives mode available to players, so it sounds like Doom Eternal will accommodate different skill levels and types of players.
We can hardly wait, and barring another delay, Doom Eternal will arrive in a couple of months.