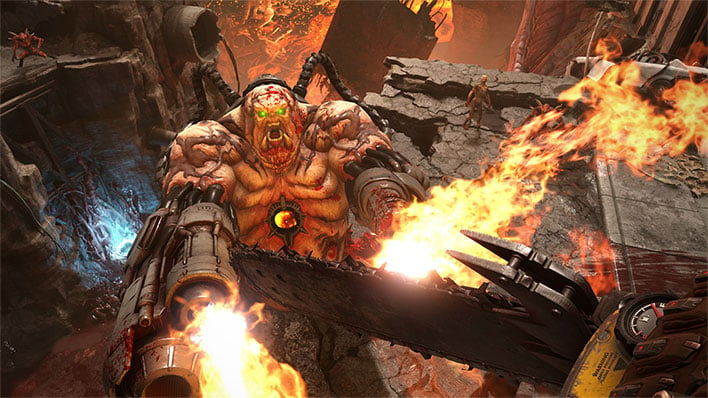 Perhaps one of the bigger surprises with Doom Eternal is that it will be launching on the Nintendo Switch, along with the Xbox One, PlayStation 4, and PC. Less surprising is that it won't come out on the Switch at the same time as other platforms—id Software and its port partner Panic Button need a bit more time to optimize and spit shine the game for Nintendo's hybrid console. Will it be worth the wait? Prepare to be "stunned."
It's still not clear when exactly Doom Eternal will arrive on the Switch, but it's definitely coming, and apparently progress on the port is promising. Or at least that is the impression of id Software director Marty Stratton.
"We really haven't talked about dates or anything—I can say that I played it about a week ago, and I am stunned," Stratton told USGamer. "Our partner on that, Panic Button, I've referred to them many times as masters of the platform, and they're proving it again. I really think it's gonna surprise be people[...] I see it all the time in the comments, when we release a video: 'Can't wait to play it on Switch, cant wait to play it on Switch.' I think people are going to love it."

Statton is setting up expectations to be wowed by Doom Eternal on the Switch, which compared to the other platforms the game is releasing on, is under powered. Even the revised version of the Switch with longer batter life is still based on a custom Tegra X1 system-on-chip (SoC), which consist of four ARM Cortex-A57 cores and 256 CUDA cores based on NVIDIA's Maxwell GPU architecture. It's not exactly cutting edge.
It's apparently enough to run a title like Doom Eternal, and do it with aplomb, if Stratton's remarks come to pass. And hopefully that's the case. Stratton isn't one to hold back on hyperbole, though, at least in regards to Doom Eternal. He recently told Gillen McAllister, author of the PlayStation blog, that Doom Eternal "is the best game we've ever made."
"We’re always introducing something new, even in the game’s later stages: new enemies, new mechanics, new visuals. You’re doing things you haven’t ever done in a Doom game before. It’s hard to get up from," Stratton said.
Doom Eternal was originally scheduled to release last November, but the decision was made to delay the launch a few months to add more "speed and polish" to the game. Barring another last minute delay, it will arrive on PC, Xbox One, and PS4 on March 20, which is just a few weeks away.
As for the Switch, Stratton says, "We're having it come out later because we want to do the right job with it, we want it to be the highest quality of the game on the Switch. [We] don't want to be compromising in any way."