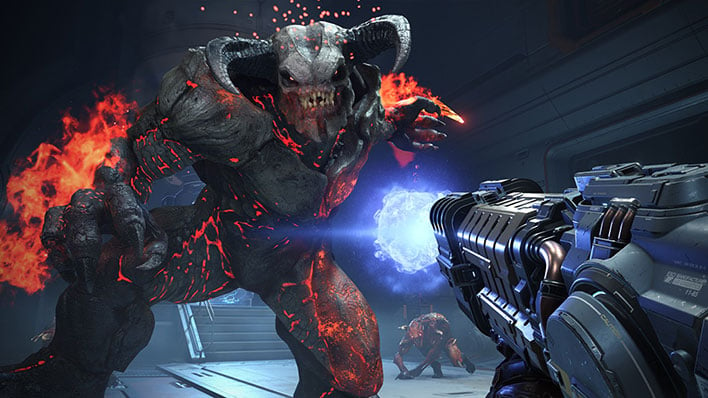 We are eagerly anticipating the launch of Doom Eternal, especially after developer id Software boldly stated it's the "best game we've ever made." There are plenty of reasons to believe that is true. Unfortunately, real-time ray tracing is not one of them, because as much as id Software likes playing with shiny new technologies, implementing fancy ray-traced visuals just was not in the cards.
That is going to be a disappointed to anyone who forked over a fistful of dollars for a GeForce RTX series graphics cards. Technically, NVIDIA's GeForce GTX cards support ray tracing as well, though the GeForce RTX series has dedicated hardware to make such a thing feasible, especially on a triple-A titles that push the graphical envelope.
Sadly, ray tracing had to be cut from the list of planned features in order to get Doom Eternal out the door in a somewhat timely manner. How come? Doom Eternal executive producer and id Software studio director Mary Stratton explained the situation in an interview with Digital Foundry.

"So we actually haven't talked about [ray tracing] at all, and we quite frankly haven't spent a ton of time [on it]. The team basically did some initial implementation and exploration about a year ago, but at that same time we had so much that we wanted to do on the game still," Stratton said.
It was not an easy decision. Stratton said the tech team at id Software is the "biggest fans of new tech, so it was a little hard to pull everybody off of that, because it was the shiny new toy." Ultimately, however, the decision was made to shelf ray tracing in order to get Doom Eternal out the door as close to on time as possible, with a high level of polish.
As much as we hate to admit it, the decision was probably a sound one. After all, Doom Eternal has already been delayed once—it was originally supposed to arrive on November 22, 2019, but id Software decided to push back the launch until March 20, 2020, in order to apply additional "speed and polish" to the game.
While ray-traced visuals won't be accompanying the PC release (or any version), Doom Eternal figures to be a massive game. Stratton previously said it is twice as big as the 2016 Doom reboot, and promised it will include "doing things you haven't ever done in a Doom game before." It will also introduce a lot of variety, from new enemies to new mechanics.
Incidentally, while ray tracing will not be part of Doom Eternal, Stratton said it is something the developers have started to look at for future titles. He also said they have "some interesting ideas" and that there is "more you can use the technology for than just the reflections and the shadows and real-time lighting." Consider our interest piqued.