It's widely expected that NVIDIA will unveil its next-generation GeForce RTX 40 series graphics cards based on Ada Lovelace at GTC next week, so the wait for concrete details is likely coming to an end very soon. In the meantime, various leaks and rumors may be cluing us into some details ahead of NVIDIA's launch. One of them is a listing of nearly a dozen custom GeForce RTX 4090 models from Gigabyte.
The GeForce RTX 4090 figures to be NVIDIA's flagship SKU until when and if a GeForce RTX 4090 Ti or Super model appears. And if a recently leaked 3DMark benchmark run is any indication, it will lay to waste the current generation flagships. The next-gen part supposedly topped 20,000 points in Time Spy Extreme, which is nearly double what NVIDIA's GeForce RTX 3090 Ti and AMD's Radeon RX 6950 XT obtain in the same benchmark.
Plenty of questions remain, obviously, such as the final specifications, power draw, pricing, availability, and if the actual performance lines up with early leaks. Regardless, it's a safe bet that NVIDIA's add-in board (AIB) partners are ready to go with custom designs. Gigabyte in particular appears to have finalized at least 11 custom GeForce RTX 4090 models, according to what it's registered with the Eurasian Economic Commission (EEC). Here's a look at the listing... 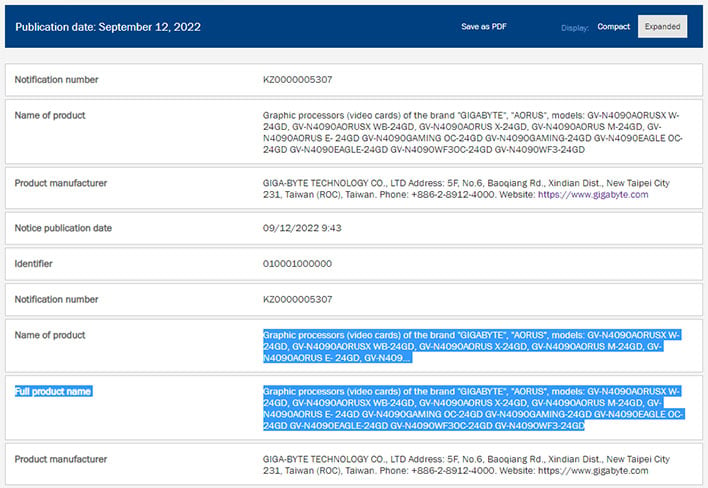 We see a mix of graphics card spread across Gigabyte's familiar product lines, including stock and overclocked Gaming, Eagle, and Windforce models, as well as several SKUs listed under its Aorus sub-brand. Only the model numbers are listed, but based on past launches, these are the models they belong to...

Most of the usual suspects are present and accounted for in the EEC listing, save for any stylish Vision models like the GeForce RTX 3090 Vision OC. However, this is not necessarily an all-encompassing list. Not everything listed on EEC's website ends up seeing the light of day, though we'd be surprised if the above models didn't end up launching—either all at once or in staggered fashion.
Based on past leaks and rumors, the GeForce RTX 4090 is expected to wield 128 streaming multiprocessors (SMs), 16,384 CUDA cores, 384 ROPs, and 24GB of GDDR6X linked to a 384-bit bus for around 1TB/s of memory bandwidth. Rumor also has it that the next-gen part will release to retail—as opposed to a GTC announcement—a little over a month from now.