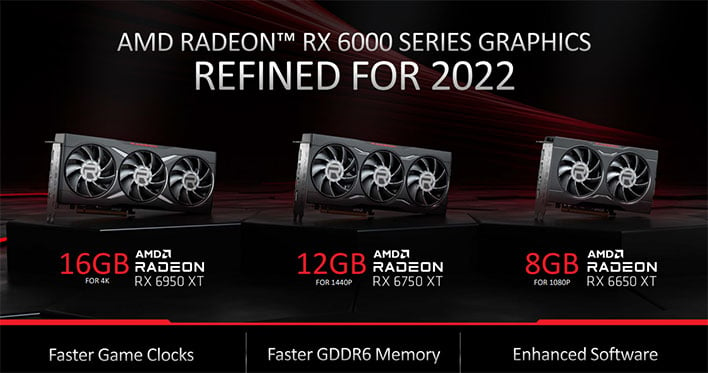 This doesn't come as a mystery considering the wealth of leaks and rumors leading up to today's official announcement. However, we can now put the speculation to rest and report on confirmed and finalized specifications. Arguably the biggest upgrade is faster memory—the new Radeon RX 6950 XT, Radeon RX 6750 XT, and Radeon RX 6650 XT each wield 18Gbps memory chips, versus 16Gbps on the Radeon RX 6900 XT, 6700 XT, and 6600 XT. 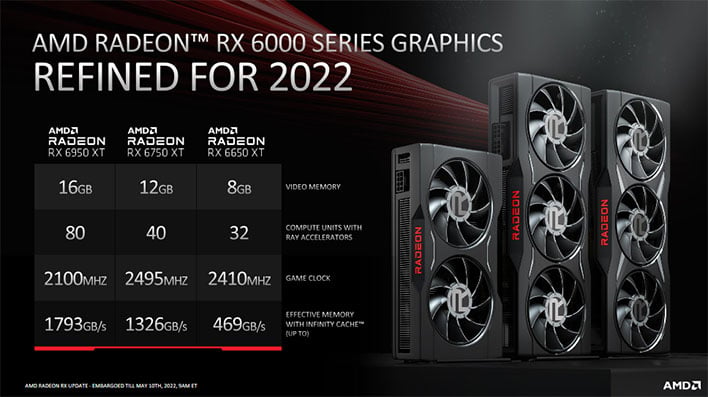 AMD also goosed the clocks on all three models, so in addition to more memory bandwidth, we're also looking at higher pixel fill rates and a bump in both single precision (FP32) and half precision (FP16) compute performance. The net result is a bit better gaming performance for not a lot more money (we'll get to pricing in a moment). 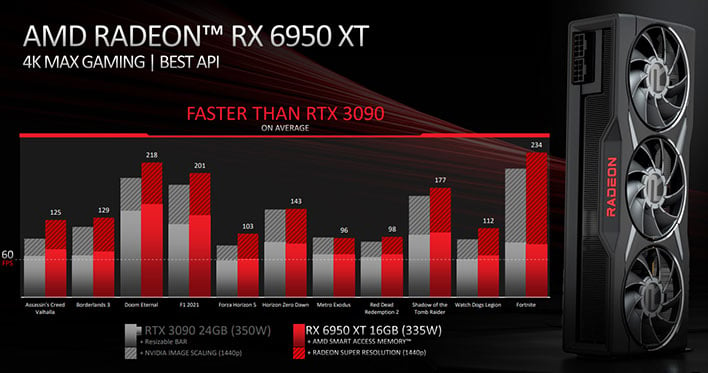 AMD is pitching the Radeon RX 6950 XT as delivering the best performance per watt and performance per dollar (bang for buck) for 4K gaming. To that end, AMD claims it is faster than a GeForce RTX 3090 in a wealth of games such as Fortnite, Doom Eternal, Shadow of the Tomb Raider, Metro Exodus, and others. 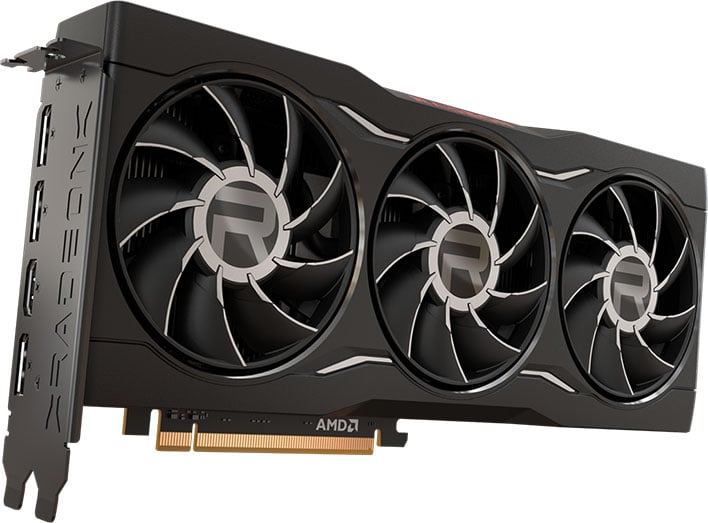 The move to 18Gbps memory chips tied to the same 192-bit bus results in 432GB/s of memory bandwidth, up from 384GB/s, and an effective bandwidth with Infinity Cache of 1,326GB/s, up from 1,278GB/s. These are more substantial gains than the FP32/FP16 and pixel fill rate bumps. 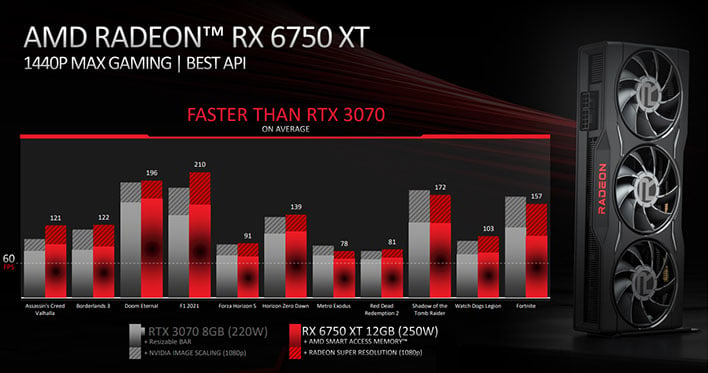 According to AMD, the Radeon RX 6750 XT is generally faster than NVIDIA's GeForce RTX 3070 at 1440p gaming, though it depends on the title. We'll have a review of the Radeon RX 6750 XT soon, so stayed tune for in-depth look at performance and how it compares to the competition in our own testing. 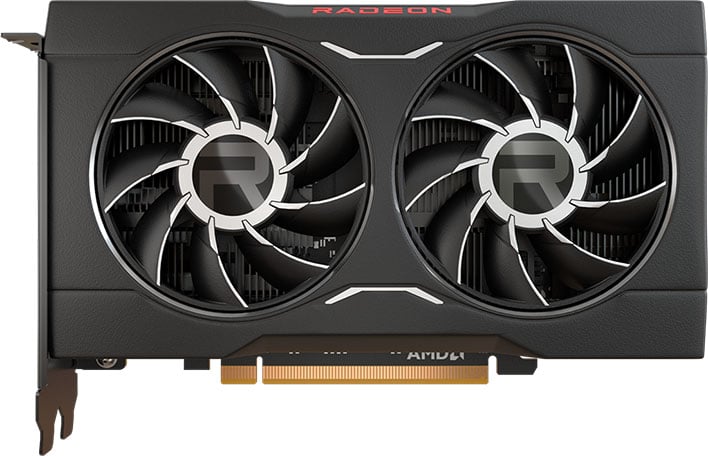 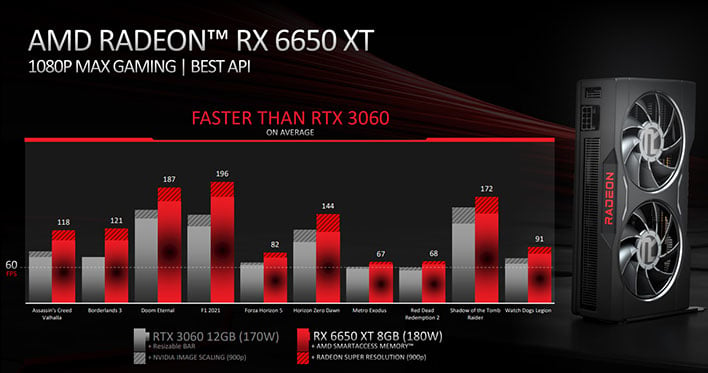 According to AMD's internal testing, the Radeon RX 6650 XT generally smokes the mobile GeForce RTX 3060 at 1080p gaming.
All of AMD's comparisons are based on enabling Smart Access Memory, with Radeon Super Resolution numbers thrown in as well. Where AMD appears to have the biggest advantage, however, is in pricing. 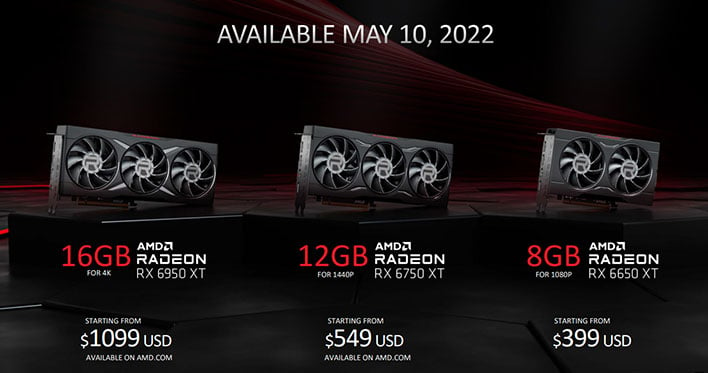 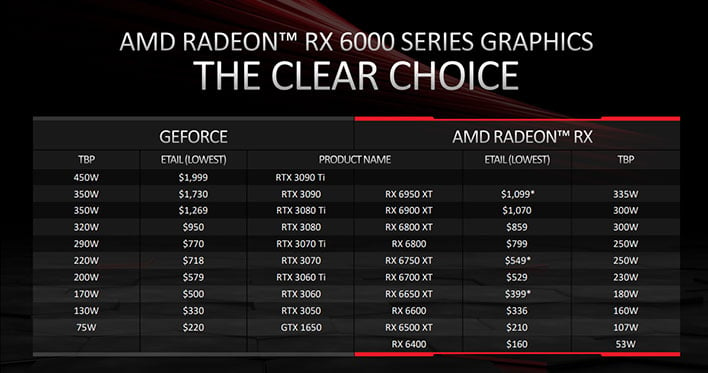 AMD lists the lowest online retailer pricing for each SKU in its entire lineup, including today's three new additions, versus the competition. If pricing and availability hold steady, the Radeon RX 6950 XT at $1,099, Radeon RX 6750 XT at $549, and Radeon RX 6650 XT at $399 will be attractive options, especially when paired with an AMD Ryzen build.
All three cards should be available now. Additionally, AMD is updating its Radeon Raise the Game bundle. Gamers who purchase a qualifying Radeon graphics card from a participating vendor starting today will receive a code to redeem for free games later in the quarter. Bundles will include Saints Row and Sniper Elite 5, with more games to be announced leading up to the launch of the promotion.
Lastly, AMD also announced the first games to support its FidelityFX Super Resolution 2.0 technology. The initial list of games include Farming Simulator 22, Forspoken, Microsoft Flight Simulator, and others. Then on May 12 of this year, Deathloop will join the fray.