As usual, the closer we get to a product launch, the more leaks we see. Intel's 13th-generation Core family, codenamed Raptor Lake, is expected to be announced in September, and should have completed manufacturing awhile back. It'll launch with its own new chipset and line of motherboards of course, but it's also going to slot into extant Alder Lake boards. As a result, we're kind of drowning in leaks from the upcoming CPU series.


We've already seen leaks of the top-end Core i9-13900K, most recently from Chinese YouTuber ExtremePlayer. We've also recently seen a couple of leaks of the top-of-midrange Core i5-13600K. What we hadn't seen until now is the Core i7, which is the subject of today's leak.

The leak comes in the form of a Geekbench test on the processor. Notably, this result comes from what appears to be the same machine as the ASRock results from the 13600K benchmark yesterday. That's apparently because both results were also from Mr. ExtremePlayer, at least if this tweet is to be believed.


Comparing the new result to the graph from yesterday, we see an even higher single-core score of 2090, while the multi-core score is just very slightly improved over the 13600K at 16542.


The only difference in core configuration between the two is the introduction of another pair of P-cores, giving it 8 P-cores and 8 E-cores like the Core i9-12900K. We'd expect an extra two P-cores to make a bigger difference than that in multi-threaded performance, but it's possible that the benchmark is running up against a power limitation. 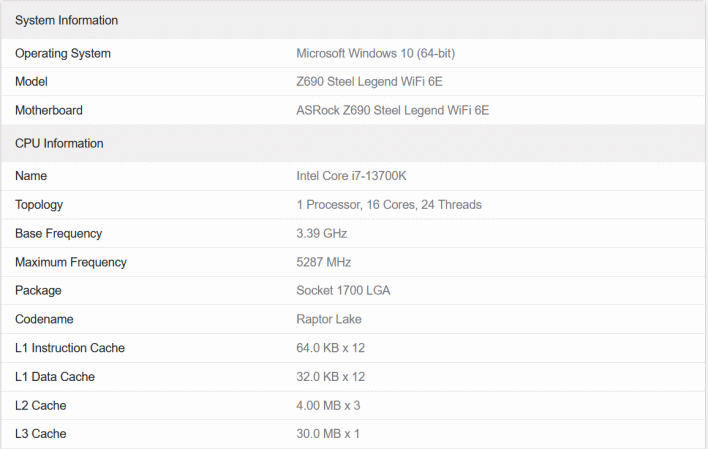 Of particular note is that the 16542 multi-core score outpaces the Ryzen 9 5950X. Multi-core performance has been AMD's bread and butter for a long time, but Intel has never been far behind. We already knew that the 24-core Core i9-13900K could outpace the Ryzen 9 5950X, but to see the Core i7 model doing it too is pretty interesting.

Of course, there's no telling how much power the Core i7-13700K was drawing during the benchmark. There's also the little matter of AMD's Zen 4 processors, which are expected to launch within a month of Raptor Lake. We've said it many times in the last couple of months, but the end of this year is going to be a huge leap forward for desktop PC performance. All we can do is wait—but don't hold your breath. It'll be a few months, after all.