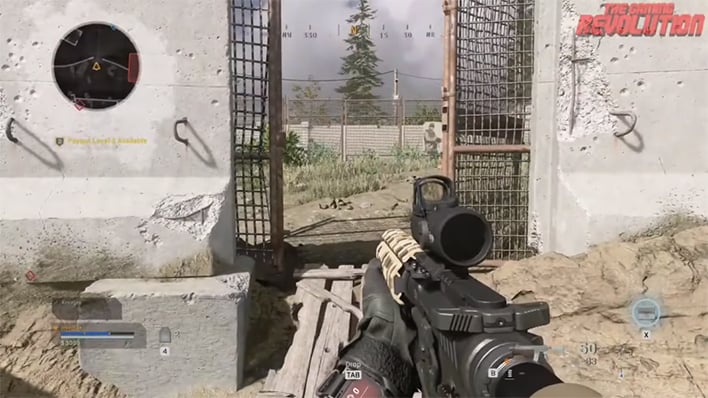 There is little doubt that developer Infinity Ward is adding a battle royale to Call of Duty: Modern Warfare. This has been rumored for several months, and an in-game Season 2 trailer certainly seems to tease its eventual addition. On top of it all, a menu glitch and gameplay footage provide the strongest evidence yet that battle royale gameplay is headed to Modern Warfare, and soon.
Nothing is real until it actually is, so we'll leave the door slightly ajar for the various leaks to all be wrong in some fashion. However, that's highly unlikely at this point. Leaked images point to a new mode called "Warzone," and there are even images of a new lobby screen that strongly hint at a battle royale mode being imminent.

I'm still in the lobby but can only do the training session. It gives the option to 'fill' or 'dont fill' the squad, but pressing either does nothing right now. pic.twitter.com/tj2iXe3Ctz

"I'm still in the lobby but can only do the training session. It gives the option to 'fill' or 'don't fill' the squad, but pressing either does nothing right now," Dean Carter wrote on Twitter.
A follow-up tweet seems to suggest he confirmed with Activision that Warzone is an upcoming battle royale mode, and lest there be any doubt, the menu glitch seems to be allowing some players to get an early jump. Check out this gameplay footage...

There is not a whole lot going on, though the narrator in the game says in no uncertain terms, "Plunder is the currency of Warzone. Loot and plunder are normally found inside buildings. Search for some plunder, see what you can find."
What the video above appears to show is Warzone's tutorial. Players start out in the firing range, and are instructed to look for plunder and loot. Previously leaked audio indicates that "plunder can be used at Supply Stations to buy kill streaks and other special items."
It's not clear how many players will participate in each battle royale session. The Ground War mode supports 64 players, and GameSpot reported in August of last year that Infinity Ward claimed it could support 100 players. Either number is fair game for Warzone.
We also don't know when this mode will finally launch. However, these recent leaks suggest it will happen very soon.