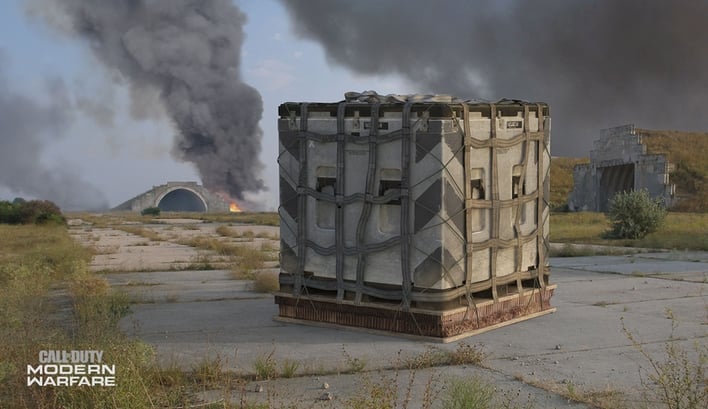 Call of Duty: Modern Warfare players have more to worry about than getting sniped from a far, or capped in the back of the head at close range by an opponent. Instead, players are finding that an item that is supposed to actually help them is actually resulting in instant death.

It all has to do with killstreaks, which made a return in the Modern Warfare reboot last year. They include items like a nuke, cruise missile, VTOL jet, or a UAV (among other devilishly devastating items). The items are randomly selected when you open a care package that is airdropped onto the map.

However, one reddit user, MineRaid, has discovered that an early-February game update has completely borked care packages. Instead of getting his randomly-selected item to rain death down upon his opponents in Cyber Attack, he was instantly killed by simply touching the care package. You can see this comical (for us at least) action taking place in the video embed above.

Killstreaks are supposed to give you a relatively quick way to add to your death count, but no one is expecting to have the tables turned so quickly on them due to a game bug with care packages. "Obviously, as Cyber Attack is a round-based gamemode, the care package was gone before Raid or his teammates could use its reward to save the game," writes Dexerto. "It’s not known whether they won the map but, at 5-2 down and seemingly without luck on their side, we can presume it didn’t go their way in the end."

At this time, it's unknown how widespread this current bug is in Modern Warfare, but a few folks in the MineRaid's thread chimed in that it has affected them as well. "Has happened too many times for me, always in shipment just for it to get stolen by a g*d damn teammate," added AK-Newbie7.

When Infinity Ward gets around to releasing a patch, we'll be sure to update this article.