You can safely assume that motherboard makers will not be caught flat-footed when Intel's 12th Gen Core desktop processors based on Alder Lake arrive. There's plenty of work that goes on behind the scenes between CPU and motherboard players. Especially so with Alder Lake, I imagine, given all the new technologies. So I tend to believe a recent list of ASUS Z690 motherboards at the Eurasian Economic Commission website is probably accurate.
Not only does it provide a list of more than a dozen Z690 motherboards from ASUS, but it also seemingly distinguishes between which models will offer up support for next-gen DDR5 memory, and which ones will stick with current DDR4 modules. Because remember, Alder Lake supports both types of memory, just not on the same motherboard.
Here's a look at the listing... 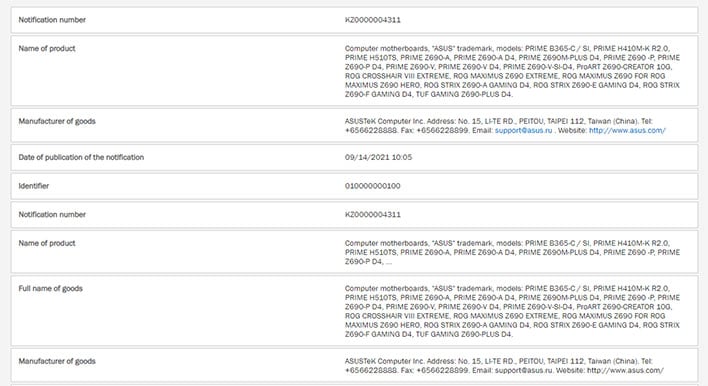 The majority of motherboards listed are Z690 models, which are based on Intel's upcoming flagship chipset, the successor to Z590. We recently wrote about a Z690 chipset diagram leak, but to quickly recap, it outlines an upgraded Direct Media Interface (DMI), the arrangement of PCIe 5.0 and 4.0 lanes, and various other bits.
It's also mentioned that Z690 will offer up a new Gear 4 mode running at 1/4 speed, to ensure stability with faster DDR5 RAM. We're curious to see how that affects performance, as well as how things compare when running Alder Lake in a DDR5 versus DDR4 platform. And while on the topic of leaks, we also wrote about a DDR5-6400 benchmark entry that showcased a nice bump in read, write, and copy performance.
As for the list of registered ASUS Z690 motherboards EEC, what's interesting to note is that several of the models contain a "D4" designation. This is presumably in reference to DDR4 memory support. If that is the case, then here is what we are looking at...
This may not be a full list, but as for what has been registered, there are seven Z690 motherboards with DDR5 support, and nine Z690 motherboards with DDR4 support. Also, kudos to ASUS if it ends up using the "D4" designation on its model labels, to make it easy for users to discern what exactly they are buying, and to avoid buying the wrong item.
What's also interesting is that it appears ASUS is reserving its enthusiast-grade ROG Maximus lineup exclusively for DDR5, according to this list, and relegating its ROG Strix boards to DDR4. That may or may not stand, but it's how things are looking right now.
As for the Prime boards, those will be split between DDR5 and DDR4 variants. Curiously missing is a Prime Z690M-Plus variant that uses DDR5 memory, so it will also be interesting to see what the small form factor offerings will be for both memory types.
Alder Lake is rumored to be announced next month, followed by a retail release in November. Official pricing has not yet been revealed, though US retailer Provantage is already accepting preorders on several Alder Lake CPUs.