Intel's retail partners are evidently chomping (technically, champing, you grammarians, you!) at the bit to offer up new Alder Lake desktop processors (Alder Lake-S), and at least one vendor in the United States is not waiting around for a formal launch. That retailer is Provantage, and it is accepting preorders for a handful of 12th Gen Intel Core processor SKUs.
The unreleased processors won't actually ship out right away, and if you add one to your cart, a message in bold red letters appears stating, "THIS SPECIAL ORDER ITEM IS NOT IN STOCK AND MAY TAKE ADDITIONAL TIME TO FILL." Message received, Provantage! Be that as it may, you can actually place an order.
I think so, anyway. I got as far as adding one to my cart, choosing a shipping option, and being prompted for payment, with tax added into the bill. That is where I stopped my experiment, and I'm fairly confident the retailer would have accepted payment, had I chosen to remit it.
While I did not go through with actually preordering an Alder Lake CPU, the other interesting thing here is this amounts to leaked pricing. And from an actual, reputable vendor, no less, as opposed to a random post on a forum or Twitter.
Provantage is offering up both individually boxed CPUs and tray models. While not confirmed by the listings, the boxed models presumably ship with a stock cooling solution, while the tray models include just a CPU. Let's have a look, shall we?... 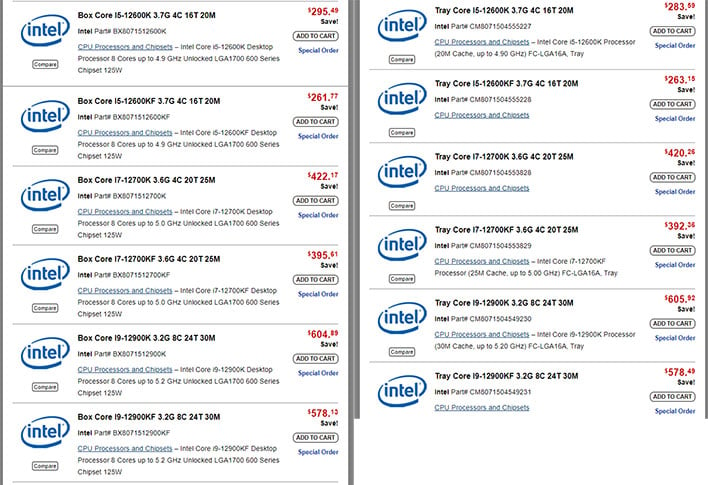 Provantage's Alder Lake pricing is nearly the same between the boxed and tray models, and in some cases, the boxed versions actually cost a tad more. This makes me question whether this is how the final pricing will generally land, once Intel launches Alder Lake and it becomes available at places like Amazon and Newegg. For now, this is the most reliable info we have to go on.
The listings also include both "K" and "KF" variants. Intel's "K" designation means it is an unlocked chip (you can adjust the multiplier in the BIOS for easier overclocking) while the "F" denotes that onboard graphics have been disabled.
All of the pricing information is shown above for easy viewing, but to see how it compares to Intel's current generation Rocket Lake stack, let's compare the boxed models of the "K" variants to what is in stock at Amazon...

As far as Provantage's early pricing is concerned, Alder Lake is a little more expensive than Rocket Lake. However, note that the Rocket Lake prices are current street costs, and not launch prices. So in that regard, it looks as though Alder Lake will generally with the current gen, as it applies to comparing model number replacements. One thing that muddies the picture, however, is fluctuating prices at Provantage—while writing this article, I've seen the Core i9-12900K and Core i7-12700K change prices by around $10.

In any event, we can also compare pricing on Provantage rather than two different vendors. The retailer doesn't have any Core i9-11900K processors in stock, but the Core i7-11700K runs $414.71 ($404.94 for tray) and the Core i5-11600K costs $275.81 ($258.59 for tray).
This is encouraging, as it looks like Alder Lake will carry with it sane pricing across the board, rather than a big up-charge over the current generation. Though of course we don't have concrete information about Alder Lake's performance just yet. Most of the leaks have been generally positive, but we'll have to wait until Alder Lake lands to know for sure where things stand.
To that end, stay tuned—Alder Lake is rumored to be announced in late October, and then available to actually buy in mid-November.