Some potentially exciting platform upgrades are on the horizon, two of them coming by way of Alder Lake and its accompanying Z690 series chipset. Namely, support for the PCI Express 5.0 bus, which doubles the bandwidth compared to PCI Express 4.0, and DDR5 memory. Will either matter? We can only wait and see, but as we do, a leaked benchmark gives us a high level look at a DDR5 memory kit that hitched its trailer to an Alder Lake CPU.
This is arguably the most interesting technology of the two new bits (PCIe 5.0 and DDR5). We'll take the fatter bus, of course, but graphics cards are not really running into performance bottlenecks on PCIe 4.0. Maybe that will change when RDNA 3 (AMD) and Ada Lovelace (NVIDIA) arrive.
What about SSDs? We are fast approaching the bandwidth ceiling, with today's fastest PCIe 4.0 SSDs breaching 7,000MB/s. So there could be some benefit there, though realistically, even a comparatively lethargic SATA-based SSD still feels fast for the most part, even though speeds top out at 'just' around 550MB/s to 580MB/s. Enter Microsoft's DirectStorage API, which could make faster SSDs more beneficial for gaming.
But anyway, back to the leak at hand—prominent tipster @harukaze5719 posted an AIDA64 screenshot showing an unspecified amount of DDR5-6400 RAM paired up with an Intel 12th Gen Core i5-12600K. Here's a look... 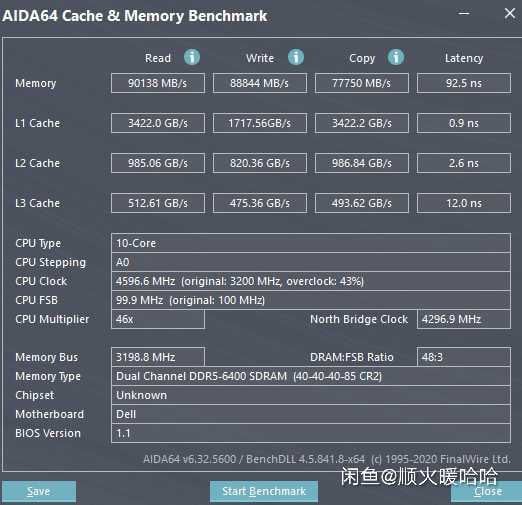 In their initial tweet, the leaker erroneously called this out as a DDR5-4800 kit, but it is actually DDR5-6400 RAM. The memory benchmark results are encouraging—generally speaking, a DDR4-4000 kit will post read, write, and copy metrics in the 60,000MB/s range. In comparison, the DDR5-6400 kit on showcase here topped 90,000MB/s for reads, was nearly as fast in writes, and hit 77,750MB/s in the copy benchmark.
Not too shabby. It's not all peaches and cream, though. The 92.5ns latency is comparatively high, and those timings are set rather loosely at 40-40-40-85. This comes with the territory of DDR5, and we're crossing our fingers that the bandwidth gains outpace any potential real-world performance hits that come from higher latencies and timings.
It's also worth noting that the setup is running in Gear 4 mode, which is a new option on Z690 boards. Gear 4 has the controller running at 1/4 the data rate to keep things stable when running high frequency RAM.
As for the CPU, the Core i5-12600K is said to pair six high-performance Golden Cove cores clocked at 3.7GHz to 4.9GHz with four power-efficient Gracemont cores clocked at up to 3.6GHz, for a 10-core/16-thread configuration.
In this instance, there's another screenshot identifying the chip as an engineering sample with a 3.2GHz stock clock speed. That is actually fairly high for an ES chip, so this is likely a later batch, but not quite a qualification sample (QS). In any event, it's been overclocked whatever platform posted the above AIDA64 screenie.
It's rumored Alder Lake will be announced next month and then land on retail shelves in November. So it will still be a matter of a few weeks before we see reliable benchmark results, both for Alder Lake and DDR5 memory.