For all of the leaks and rumors related to Intel's upcoming Alder Lake launch, actual CPU product photos have been very few and far between. So it is notable that the an Alder Lake CPU has smiled for the camera, giving us a mostly clear view of the bottom (it's not a high resolution image, but it is at least mostly devoid of blurriness). In addition, a supposed Z690 chipset diagram has manifested as well.
For the most part, leaked Alder Lake benchmarks have hinted that Intel's hybrid architecture is the real deal, and will be a meaningful upgrade over its current generation CPUs. Obviously we will not know for sure until we have had a chance to put the chips through their paces ourselves, on finalized silicon no less. But the leaks have mostly been encouraging.
As part of its hybrid makeup, Alder Lake will be more rectangular than Rocket Lake and Comet Lake. And on the desktop, it will also introduce a new LGA (Land Grid Array) 1700 socket, adopted Intel's Z690 and other 600-series chipsets. 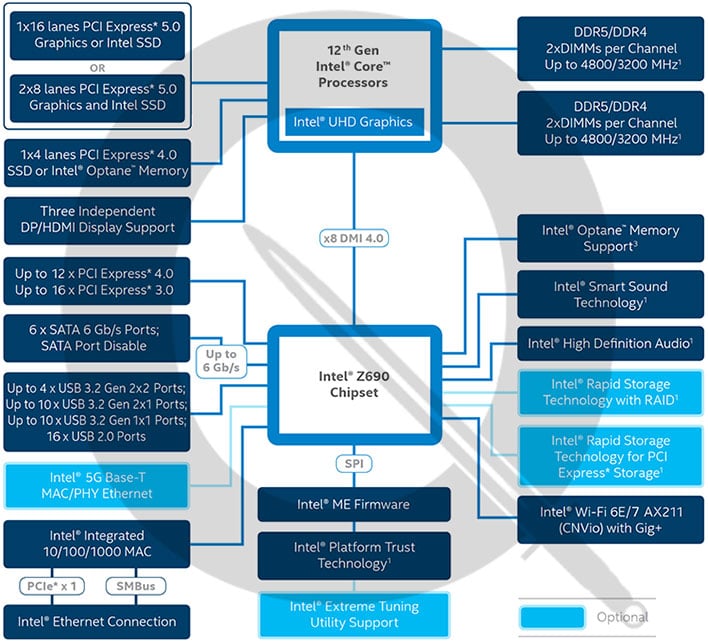 Hat tip to the folks at Performance Computing Inquisitor for posting a photo of the bottom side of an Alder Lake CPU (shown up up, click to enlarge) and what looks to be an official Z690 chipset diagram (shown directly above). Obviously we can't say for sure if one or both are real, but being this close to launch, it's likely they both are.
So, what are we looking at here? It's mostly confirmation of what we already knew, such as support for both DDR5 and DDR4 memory (not on the same motherboard) and PCI Express 5.0. But there are also some accompanying details that are interesting.
The diagram indicates Alder Lake will serve up 16 lanes of PCIe 5.0 traffic attached directly to the CPU (by way of 1x16 or 2x8), as well as four lanes of PCIe 4.0 traffic. On the chipset side of the equation, it supports up to a dozen lanes of PCIe 4.0 and up to 16 lanes of PCIe 3.0 traffic.
For consumers, this boils down to being able to install multiple high-speed PCIe 4.0 SSDs without tapping into the PCIe 5.0 bus, which can be reserved for next-generation graphics cards. The PCIe bus hasn't really been a bottleneck for GPUs, but with the added bandwidth, perhaps NVIDIA (Ada Lovelace), AMD (RDNA 3), and Intel (Battlemage) will take advantage of it. There's also next-gen SSDs to consider (though today's fastest PCIe 4.0 models are extremely fast, with speeds north of 7,000MB/s).
Other notable bits include an upgraded Direct Media Interface (DMI), and Gear 2 or Gear 4 modes for DDR5 memory. As we saw with Rocket Lake, using Gear 2 (1/2 speed) can provide stability for when running extremely fast memory kits. Likewise, it will do the same for Alder Lake systems, as well as a new Gear 4 (1/4 speed) mode that can kick in, depending on the RAM's transfer rate.
Of course, this is a leaked slide, so don't consider these specs as being written in stone. We'll find out soon, though, with Alder Lake's launch being right around the corner.