'Tis the season of device trade-ins and gadget upgrades with Black Friday and Cyber Monday fast approaching, as well as the holidays. As seasonal bargains come into view, however, you may find that your Apple device fetches less trade-in credit than it did just a couple of short days ago—up to $550 less, in fact, depending on what you're looking to exchange for credit.
"It’s easy to trade in your eligible device for credit toward your next purchase, or get an Apple gift card you can use anytime. If your device isn’t eligible for credit, we’ll recycle it for free. No matter the model or condition, we can turn it into something good for you and good for the planet," Apple states on its official trade-in page.
That's all fine and dandy, but as time goes on, trade-in values drop. It just so happens that Apple chose to slash the credit amounts on several devices right as the holiday season is arriving. 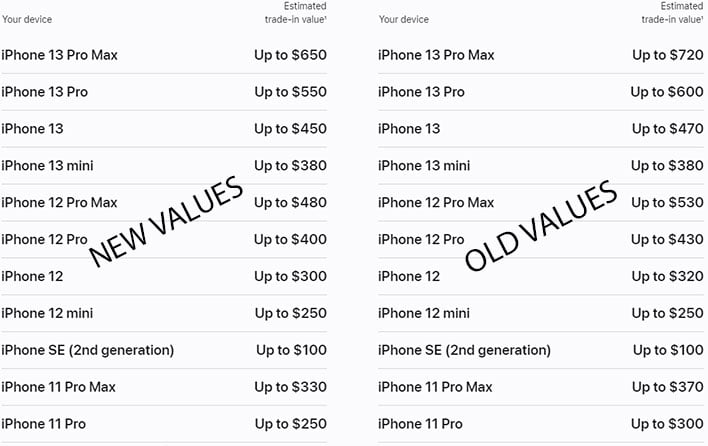 A quick trip in the Wayback Machines allows us to compare the altered trade-in values to what they were set at just two days ago. As you can see above, the iPhone 13 Pro Max now fetches up to $650 versus $720 before Apple lowered the trade-in values, which is a $70 difference. Likewise, the trade-in values for the iPhone 13 Pro and iPhone 12 Pro Max are both now $50 lower than before.
It's not just iPhone models that are affected. The biggest price difference applies to the Mac Pro—it's now worth up to $600 in trade-in credit at Apple, versus up to $1,150 before the adjusted values went into effect. That's a sizable $550 difference, meaning it dropped in value by nearly 48 percent.
Trade-in values also dropped for some Apple Watch, Mac mini, iMac, MacBook, and iPad models, so the reduced values are pretty much across the board, in terms of product categories.
There are a couple of welcome albeit minor outliers. Specifically, the iPhone XS is now worth up to $160 instead of $150 previously, while the iPhone XR also went up $10 to $150. But most everything else now commands less in trade-in credit, while a few items have stayed the same.
Selling your old device on your own is still an option, of course, and it's worth investigating what you might get on eBay (after fees) and other places before settling for trade-in credit. Either way, be sure to stay plugged into HotHardware as we'll be covering holiday deals as they arrive.