One very talented (and driven) group of engineers decided that enough is enough and built their own functional foldable iPhone in less than a year. It wasn't easy, though.


If there is any proof that iPhone users are envious of all the flip and fold phones of the world outside of the iOS ecosystem, look no further than this nifty mod posted to the YouTube channel Tech Aesthetics, the host of which presented his team's vision of what a flip iPhone could be like. The engineering and hacking required for this project is nothing to sneeze at, so be sure to watch the video to truly appreciate the final product (closed captions are available)...
In order to make this happen, the Tech Aesthetics engineers re-purposed components from unlikely sources. For one, the flexible screen was taken from separating the layers of a rigid display on an iPhone X, or rather, 37 of them before they were successful. The chassis was from a sacrificial iPhone 5, with the hinge itself was plucked from a Motorola Razr.
The video (embedded above) goes into some length of how the engineers wanted to keep the project as close to an iPhone with iOS as possible. This, among other things, would explain why they painstakingly dismantled so many iPhone X screens to get to the softest layers while retaining touch functionality. 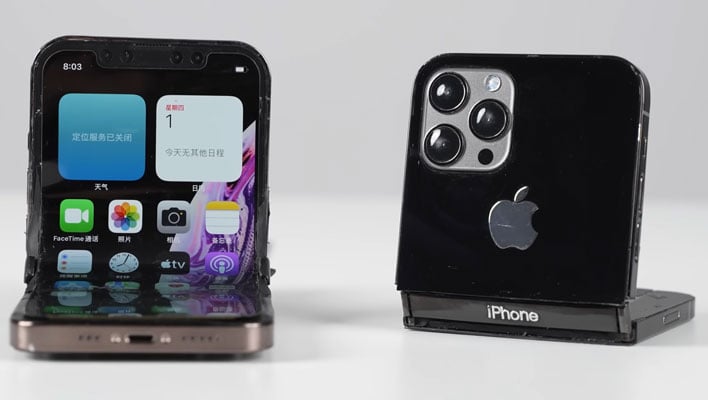 Of course, cutting a phone in half requires rethinking where every internal part goes. This flip iPhone had to have its battery reduced to a customized 1000 mAh cell, with other standard iPhone parts thrown out, such as the MagSafe wireless charging assembly and one of its speakers. The group also 3D-printed various components to ensure things fit just right and the way they needed.

In the video, iOS seems to function normally, so did the all-crucial touch functionality. But once again, much to the chagrin of Apple lawyers, the Tech Aesthetic team installed a jailbreak version of the operating system to work with the folding display.


We are curious to see if these YouTubers will create an improved version of the flip iPhone. They deem this a prototype and claim that they intend on refining the design and build of version 0.1.
Top/Thumbnail Image Source: Tech Aesthetics (via YouTube)