Hardware enthusiasts will already know, but for anyone who doesn't, the performance of AMD's extant Ryzen platforms is seriously impacted by the transfer rate of the system RAM. It's not actually the memory bandwidth that matters for most tasks; instead, it's because the speed of the "Infinity Fabric" is linked directly to the memory clock. Faster memory means faster IF, and that means reduced latency across all parts of the chip.


It's not known whether that will remain the case for the red team's upcoming Zen 4-based processors, but given the company's statements on DDR5 overclocking—specifically, that it will hit "speeds that you maybe thought couldn't be possible"—we'd expect so. System memory bandwidth is rarely a limiting factor outside of its effects on Zen's Infinity Fabric, so the emphasis on fast memory could point to similar behavior on Zen 4. 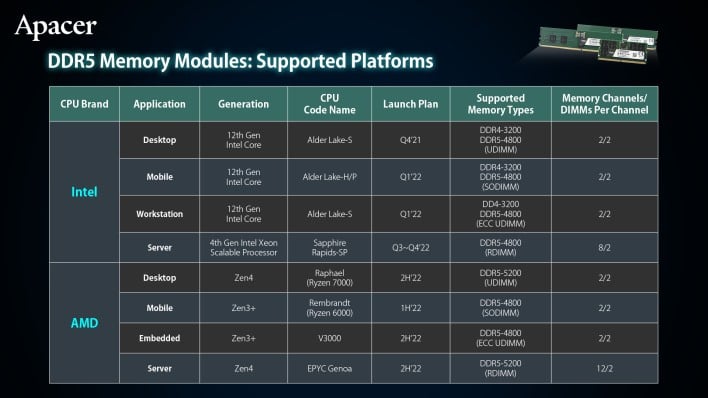 
Another point in the favor of that argument is the slide above from Apacer Industrial, discovered by Twitter leaker @momomo_us, which clearly marks down Zen 4-based Ryzen and EPYC processors for DDR5 memory running at up to 5200 MT/s. That's a fair whack faster than the DDR5-4800 officially supported by Intel's latest chips, although Intel's processors certainly aren't limited to just that.

The slide is buried in an obscure page that outlines the benefits of DDR5 memory over DDR4, like higher transfer rates, higher density, and on-module power management, and it certainly isn't official AMD material, which means it's possible that AMD's Ryzen 7000 chips could be spec'd for lower or even higher DDR5 speeds. Still, it's likely that Apacer was given these numbers by AMD, so we're ready to take them at face value.

Of course, AMD's aforementioned emphasis on Zen 4's ability to hot-clock DDR5 could just as easily be an indication that the Infinity Fabric clock on Ryzen 7000 processors ISN'T linked to memory speed anymore. After all, such a link is still likely to limit the peak memory speed, and DDR5 is already expected to scale past 7000 MT/s. Here's hoping that prices on the fancy RAM come down by the time AMD's next Ryzen chips hit the market, because they won't support DDR4.