While the conventional wisdom has been that overclocked memory offers minimal performance gains, that's just not the case. Faster memory, whether it increases clock rate, reduces latency, or both, can have a significant effect on system performance. It's most noticeable in apps like video encoding and compression, as well as in minimum frame rates while gaming.


People who have built Ryzen systems, as well as anyone who follows system builder news, are likely well aware of the socket AM4 platform's past memory issues. Intel's DDR4 platforms can scale memory clock to the sky, with the world record being over 7150 MT/s. AMD's earlier Ryzen chips struggled to scale past 3200 MT/s, although Zen 3 has largely resolved this concern, at least insofar as it matters practically. 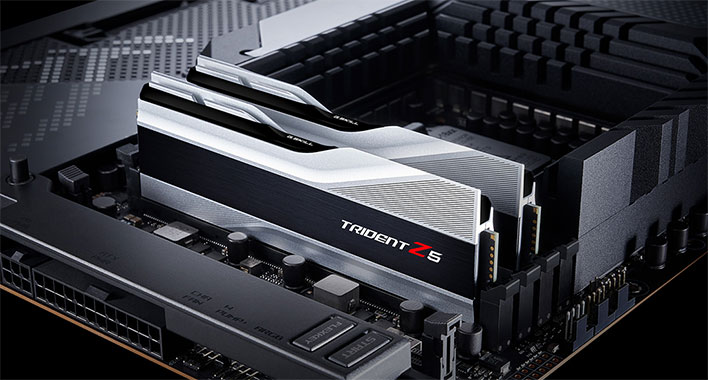 It looks like AMD is looking to avoid any such issues with its first DDR5-capable desktop platform. The red team hosts regular webinars in its "Meet The Experts" series, and the latest one was a collaboration with Samsung to talk about upcoming DDR5 memory technologies, titled "Next-Generation Memory: Introducing DDR5 DRAM."

As part of that webinar's Q&A session, an AMD manager named Joseph Tao stated that the house of Ryzen is looking to make a "big splash" in the world of DDR5 overclocking. His full statement was as follows:

Our first DDR5 platform for gaming is our Raphael platform, and one of the awesome things about Raphael is that we are really going to try to make a big splash with overclocking. I'll just kinda leave it there, but speeds that you maybe thought couldn't be possible, may be possible with this overclocking spec.

Raphael is, of course, the codename for AMD's upcoming Ryzen 7000 series desktop processors based on its Zen 4 architecture. Tao, whose title is "Memory Enabling Manager," went on to mention Raphael a couple of other times, including stating that it was targeted specifically (but not exclusively) at gamers.


Hearing that AMD is expecting to push the envelope in terms of memory speeds is heartening. Zen uses a fabric called Infinity Fabric to connect its components, and so far, memory performance on Ryzen processors has been slightly limited by the capabilities of their Infinity Fabric.

Based on Tao's statement, it seems like AMD may have a trick up its sleeve with Zen 4 to allow the new processors to scale beyond the chips' prior limits. It would be quite interesting to see a champion overclocker take the "fastest DDR5" title with an AMD platform.