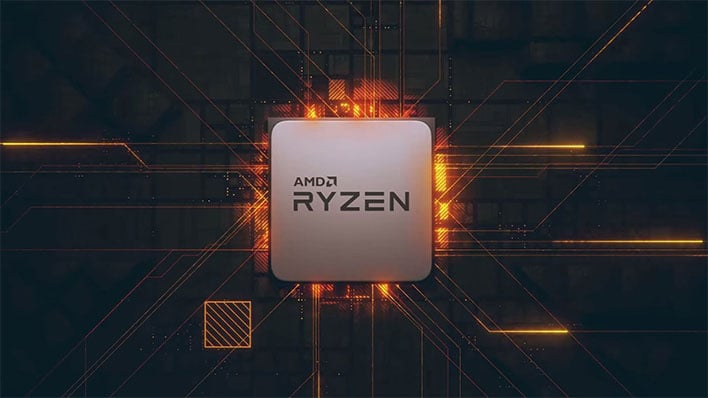 AMD is out there living the good life right now. Zen has proven to be a formidable contender, it seems like a Zen 2 refresh is en route, and looking further down the road, Zen 3 will likely keep the party going. As it pertains to the latter, a new leak potentially sheds some light on what AMD has on tap, both for its upcoming CPUs and APUs.
All indications point to Zen 3 being on track for a release later this year. It will leverage an enhanced 7-nanometer node, which AMD and TSMC are not referring to as 7nm+, and is expected to deliver a nice bump in IPC (instructions per clock) performance. We can also expect better power efficiency and some new features.
Beyond those things, here is the supposed roadmap, as posted by Twitter user Komachi...

The leaked roadmap isn't super telling, but it does list a bunch of codenames for products through 2022. We are already half way through 2020, so the more interesting stuff is what's on tap for 2021 and beyond, starting with Cezanne.
According to Expreview (via Videocardz) and its "anonymous sources," Cezanne will be a next-generation APU that pairs Zen 3 CPU cores with another round of Vega graphics. That is a bit disappointing, as we would like to see AMD be a little more aggressive on the graphics side with its APUs—if not RDNA 2, then at least RDNA 1 (current generation Navi).
Still, the combination of Zen 3 with respectable onboard graphics is an enticing proposition, even if we don't get anything based on RDNA 1 or 2.
Looking ahead to 2022, the leaked roadmap lists Rembrandt as being on the horizon. This is rumored to feature Zen 3+ CPU cores paired with RDNA graphics, at long last. This is said to support DDR5 memory and USB4, according to those unnamed sources, in addition to PCI Express 4.0 (the latter of which is already supported on Zen 2).

This is all feasible. With regards to the memory, SK Hynix recently announced it was beginning mass production of DDR5 DRAM modules this year, and Micron has been shipping LPDDR5 (for mobile phones) since the beginning of the year.
As for USB4, it is shaping up to be the king of all ports with oodles of bandwidth and a DisplayPort Alt Mode 2.0 specification that allows the USB-C connector to shuttle DisplayPort video data along four lanes at 80Gbps.
"With the new DisplayPort Alt Mode 2.0 specification, USB Type-C now delivers compelling single-connector solutions for docking, gaming, AR/VR HMDs, and professional HDR displays that combine 80 Gbps of video bandwidth and other important features of DisplayPort 2.0 with the transport of USB data and power delivery," VESA board vice chairman Syed Athar Hussain recently said.
While not shown on the roadmap, the sources also point to a Van Gogh APU coming out sometime later. These would be ultra-low voltage APUs with Zen 2 CPU cores and RDNA 2 graphics. A Google translation of the report says they would be "simplified versions" of the custom silicon inside the Xbox Series X and PlayStation 5.
One thing that doesn't look set to change is that AMD's APUs will continue to be a generation behind its CPUs at the outset. That's to day, Zen 3 (Vermeer) CPUs will arrive before Cezanne comes into the picture. This has been the trend up to this point, with AMD's latest generation Renoir APUs pairing Zen 2 CPU cores with Vega graphics arriving on the scene only recently.
It's going to be interesting to see how things shape up. The leaked roadmap suggests Intel will be under continued pressure from AMD for the foreseeable future, which puts customers in good shape going forward.