AMD and Intel are in a dogfight in the CPU space, and unlike the days of old, it's actually a competition now. That's because AMD has done a spectacular job building up its Zen architecture, culminating (so far) in Zen 2. Meanwhile, Intel continues to squeeze out every ounce of performance it can from its 14-nanometer node. This has made things interesting, and if a set of leaked benchmarks are any indication, the next round will be the best yet.
We are not talking about Zen 3 versus Intel's eventual 10nm (or 7nm) desktop processors. That will have to wait. But in the more immediate future, rumor has it AMD is prepping a round of refreshed Ryzen 3000 series processors to go up against Intel's stack of Comet Lake-S CPUs. And that is what the latest leak focuses on.
Over at Chiphell, a user posted a set of supposed Cinebench R20 benchmark scores, pitting AMD's unreleased and unannounced Ryzen 9 3900XT, Ryzen 7 3800XT, and Ryzen 5 3600XT CPUs against Intel's flagship Core i9-10900K and several other processors. Have a look... 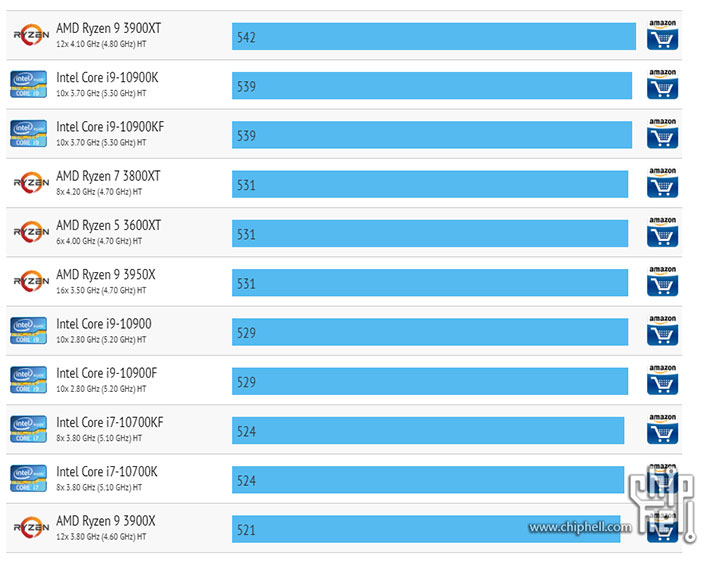 To be clear, we don't know for sure if AMD is actually getting ready to refresh its Zen 2 processors, and even if so, whether or not the above benchmark scores are legitimate. Assuming it all checks out, however, AMD is about to earn itself some additional bragging rights.
The Ryzen 9 3900XT took the top score at 542 in Cinebench R20's single-core test, in this leak. That was enough to edge out the Core i9-10900K, which scored 539. Earning a victory is noteworthy, but what makes this even more interesting is the clockspeed comparison. The leak shows the Ryzen 9 3900XT boosting to 4.8GHz (versus 4.6GHz for the Ryzen 9 3900X), whereas the Core i9-10900K can hit 5.3GHz. That is a 500MHz difference.
Also interesting is the Ryzen 5 3600XT entry. The leak shows it boosting to 4.7GHz and scoring 531 in the single-core test, whereas the Core i9-10700K boosts to 5.1GHz and scores 524. So as with the other comparison, this leak suggests AMD's upcoming parts will outperform Intel's latest silicon in some single-threaded workloads, while running at slower clocks.
Whether that ends up being true or not, we'll have to wait and see. It's never a good idea to put a whole lot of stock into leaks, and to be fair, Cinebench R20 is just one benchmark. Nevertheless, these results are intriguing.