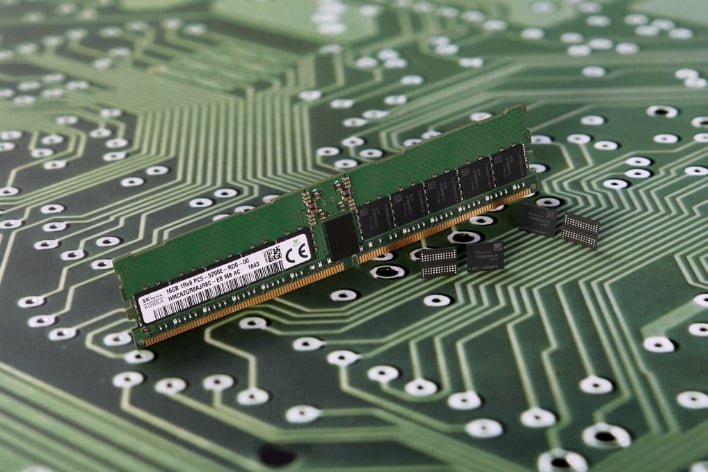 It's about that time again in the desktop market to switch to a new memory standard. We first began the transition from DDR3 to DDR4 six years ago, and now memory suppliers are laying the groundwork for the leap from DDR4 to DDR5.

So, what kind of advantages will DDR5 offer over its predecessor? Well, SK Hynix is claiming that DDR5 will ultimately offer twice the bandwidth currently available with DDR4 modules. With processor core counts increasingly skyrocketing on modern processors (consumer desktop processors can hit 16 cores and 32 threads, with prosumer platforms hitting the 64-core/128-thread), SK Hynix says that the next-generation DDR5 is poised to help satisfy these bandwidth needs.

Current DDR4 modules top out at a JEDEC-certified DDR4-3200, although we've definitely seen some modules "boosted" to DDR4-4866 speeds (we're looking at you, Corsair). DDR5 will provide at least a 50 percent boost in bandwidth, meaning that DDR5-4800 should commonplace once the first modules start hitting the market. But speeds will ramp up from there, with SK Hynix claiming that JEDEC speeds will reach DDR5-8400 in the future.

All of this will come with modules that have an operating voltage of just 1.1V, compared to 1.2V for DDR4. There will also be on-die error correction for "more reliable technology node scaling by correcting single bit errors internally". DDR5 also adheres to a 32banks structure, featuring 8 bank groups, which is an upgrade from the 16banks/4 bank groups used in DDR4. Burst length has also been doubled to 16 versus 8 for DDR4.

“In the 4th Industrial Revolution, which is represented by 5G, autonomous vehicle, AI, augmented reality (AR), virtual reality (VR), big data, and other applications, DDR5 DRAM can be utilized for next-gen high performance computing (HPC) and AI-based data analysis,” said Sungsoo Ryu, who is SK Hynix's Head of DRAM Product Planning. “DDR5 will also offer a wider range of density based on 16Gb and even 24Gb monolithic die, in order to meet the needs of cloud service customers. By supporting higher density and performance scalability compared to its predecessor, DDR5 has set a firm foothold to lead the era of big data and AI."

IDC is forecasting that DDR5 will capture 22 percent of the overall DRAM market in 2020, with that figure nearly doubling to 43 percent in 2022. For its part, SK Hynix says that it will begin DDR5 mass production later this year.