This is going to be a fun year for laptop aficionados. In case you missed it, AMD announced at CES 2020 a new line of Ryzen 4000 mobile "Renoir" processors based on its Zen 2 CPU architecture and paired with Radeon Vega graphics. The top dog in the mobile lineup is the Ryzen 7 4800H, and some newly leaked benchmarks suggest it will offer desktop-class performance in a mobile package.
Laptop makers have not yet released any models with Ryzen 4000 series hardware inside, though you can expect systems to arrive soon (as in, this quarter). Sitting at the top of the stack, the Ryzen 7 4800H wields 8 cores and 16 threads of computing muscle. It has a 2.9Ghz base clock and 4.2GHz max boost clock, as well as 8MB of L3 cache.
Just looking at the specs, we can see it is a burly chip based on AMD's latest generation CPU architecture. The onboard graphics is less exciting because AMD is sticking with Vega for another round, though the company claims it made some architectural enhancements and optimizations to yield up to a 59 percent improvement in performance per graphics core, compared to its previous generation APUs with Vega onboard.
Now this is where things get interesting. Twitter user APISAK posted some leaked benchmark results claiming to show a 3DMark Time Score obtained from a Ryzen 7 4800H. Here's a look...

Assuming the scores are accurate (and as always, we don't know if they are, given that this is leaked data), the Ryzen 7 4800H scores just a tad lower than an 8-core/16-thread Ryzen 7 2700X (Zen+) desktop processor, and is faster than a 6-core/12-thread Ryzen 5 3600 (Zen 2) CPU, in the Time Spy Physics benchmark. It also beats out Intel's 8-core/8-thread Core i7-9700K.
Another prominent leaker on Twitter, _rogame, posted a screenshot of the 3DMark listing, giving us a glimpse of a few more details. Have a look... 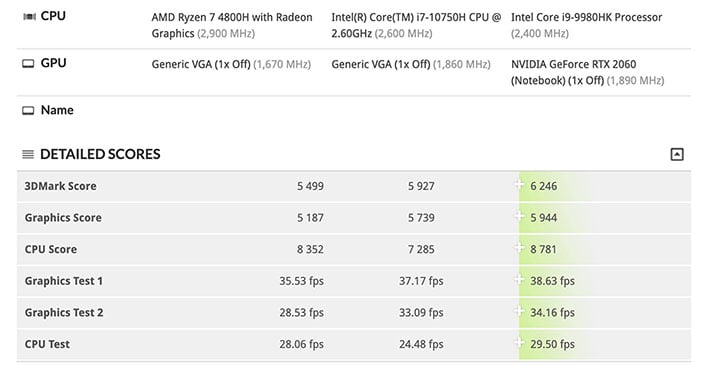 The benchmark comparisons pit a Ryzen 7 4800H laptop with a Radeon RX 5600M GPU against a two other notebooks, one with a Core i7-10750H and GeForce GTX 1660 Ti, and the other with a Core i9-9980HK and GeForce RTX 2060.
As we would expect, the latter is the fastest of the bunch, though it's awfully close in some of the individual metrics. For example, in the CPU test, only 1.5 frames per second separate the Core i7-10750H from the Ryzen 7 4800H.
It's too early to make any kind of determination. However, depending on how pricing lands on Ryzen 7 4000 series laptops, AMD could quite literally give Intel and its 10th generation mobile lineup a run for the money.