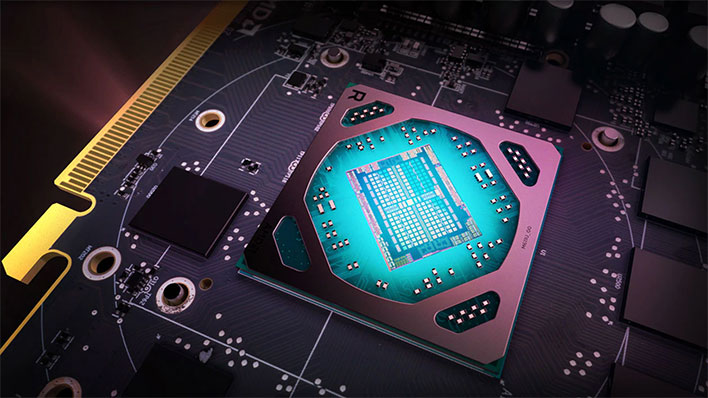 Anticipation is running high for AMD's second-generation Radeon DNA (RDNA 2) graphics architecture, the one that will underpin the so called 'Big Navi' GPU. Will it dethrone NVIDIA's competing Turing lineup, or be competitive with upcoming Ampere parts? Those questions will be answered at a later date. In the meantime, a fresh leak on Twitter outlines potential specifications for a Big Navi card, and they're a doozy.
Before we get to that, let's talk about the evolution of Navi. The current versions (Navi 10 and Navi 14) are what power AMD's Radeon 5000 series. They are based on RDNA 1.0 and leverage a 7-nanometer manufacturing process. The boldest iteration so far is the Radeon RX 5700 XT with a Navi 10 XT GPU inside featuring a 251mm2 die size and 10.3 billion transistors.
As outfitted in the Radeon RX 5700 XT, we are looking at 2,560 shading units, 40 computing units (CUs), 160 texture mapping units (TMUs), 64 render output units (ROPs), and 4MB of L2 cache. There is also 8GB of GDDR6 memory piping data through a 256-bit bus, resulting in 448GB/s of memory bandwidth. All of these figures will come in handy when looking at the leaked Big Navi data.

Take this with a hearty dose of skepticism, but over on Twitter, a user who goes by CyperPunkCat claims to have received a photo of a document from one of their contacts at SK Hynix. Have a look... 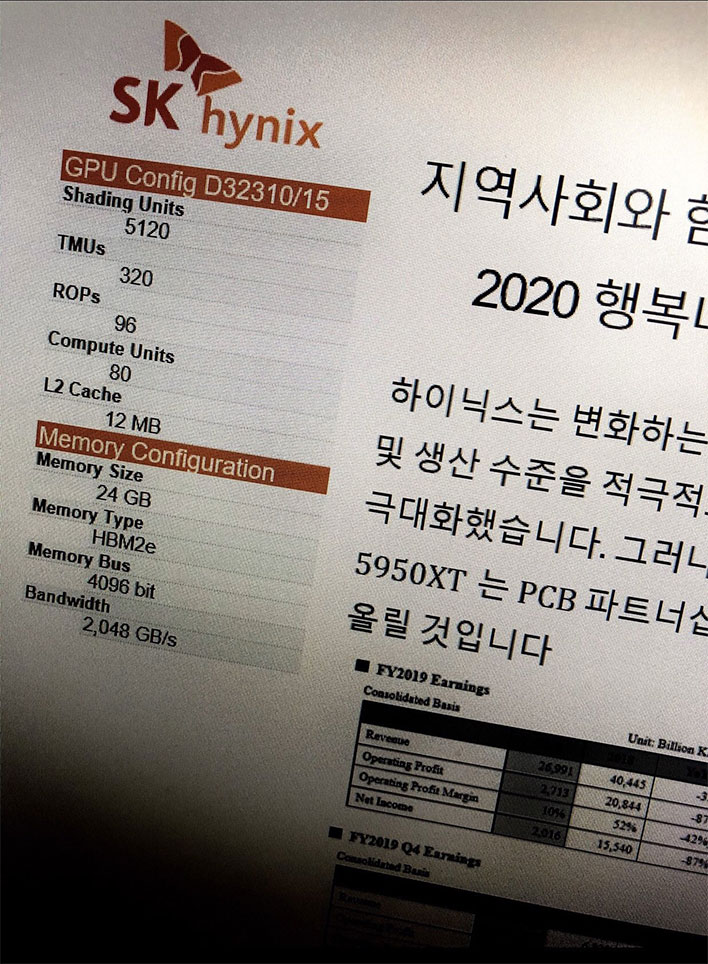 The supposed document lists a bunch of specifications for an unannounced Radeon RX 5950 XT graphics card based on RDNA 2. It's fairly comprehensive on what it purports to reveal, starting with a GPU listed as D32310/15.  We can only assume this is supposed to be a Big Navi variant, though the specifications is where the real fun begins.
According to the photo above, we are looking at a next-gen GPU with 5,210 shading units, 80 CUs, 320 TMUs, 96 ROPs, 12MB of L2 cache, and 12GB of HBM2e memory on a 4,096-bit bus for 2,048GB/s of memory bandwidth.

That would be Big Navi if true. Hynix showed a 4Gb/s HBM2e stack last week at ISSCC-2020.

In one of the follow-up comments, Hans de Vries points out that SK Hynix showed a 4 gigabit per second (Gb/s) HBM2e stack last week at ISSCC, which would align with the leaked specifications. That doesn't mean this leak is real or accurate, but it is certainly interesting.
The supposed specifications are leaps and bounds ahead of the Radeon RX 5700 XT, with double the number of shading units and a sizable boost in the memory configuration. If the Radeon RX 5950 XT does come to pass as outlined, it would undoubtedly offer a huge performance gain over AMD's current top offering.
It would also be expensive. Not only is the Radeon RX 5950 XT looking like a flagship part, the use of HBM2e memory would not come cheap. So if this does end up being real, brace yourself for potential sticker shock.