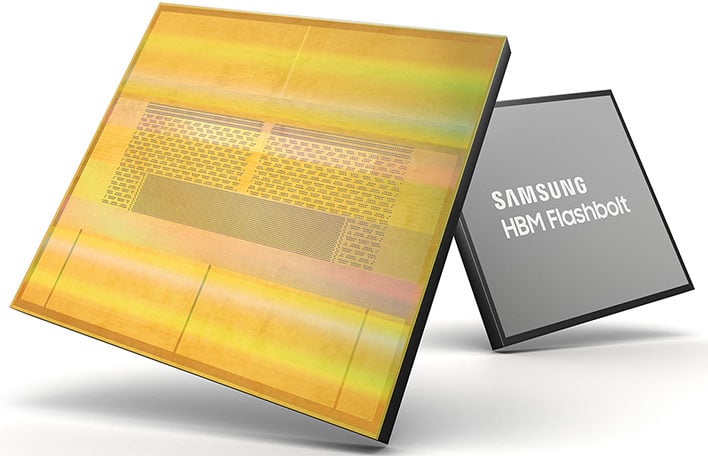 The name "Flashbolt" sounds like it could be a comic book superhero, or a spell you cast when running up against some ruffians in a role playing game. Neither of those things are what Samsung had in mind when launching Flashbolt, which is actually its third-generation high bandwidth memory 2E (HBM2E) designed for high performance computing (HPC) applications.
Samsung's unveiling comes hot on the heels of JEDEC publishing an updated revision of the HBM2 standard called JESD235C. The updated standard pushes speeds to 3.2Gbps per pin, paving the way for 410GB/s of memory bandwidth per stack. And so it goes with Samsung's new Flashbolt solution, which adheres to those specs.
"With the introduction of the highest performing DRAM available today, we are taking a critical step to enhance our role as the leading innovator in the fast-growing premium memory market," said Cheol Choi, executive vice president of Memory Sales & Marketing at Samsung Electronics. "Samsung will continue to deliver on its commitment to bring truly differentiated solutions as we reinforce our edge in the global memory marketplace."

Flashbolt doubles the capacity of Samsung's previous generation Aquabolt HBM2 solution, going from 8GB to 16GB. Samsung said it achieved this by vertically stacking eight layers of 10-nanometer class 16-gigabit (16Gb) DRAM dies on top of a buffer chip
"This HBM2E package is then interconnected in a precise arrangement of more than 40,000 ‘through silicon via’ (TSV) microbumps, with each 16Gb die containing over 5,600 of these microscopic holes," Samsung explains.
While the current Flashbolt solution adheres to JEDEC's revised standard, Samsung says its proprietary circuit design for signal transmission could push the HBM2E transfer speed to 4.2Gbps, which in turn would bump the memory bandwidth to 538GB/s per stack "in certain future applications."

Samsung anticipate volume production to kick off sometime in the first half of 2020. There is no mention of cost, which is of particular interest, given that HBM chips are comparatively expensive. For those who want a more affordable solution, however, Samsung says it will continue to offer its second-generation Aquabolt lineup.