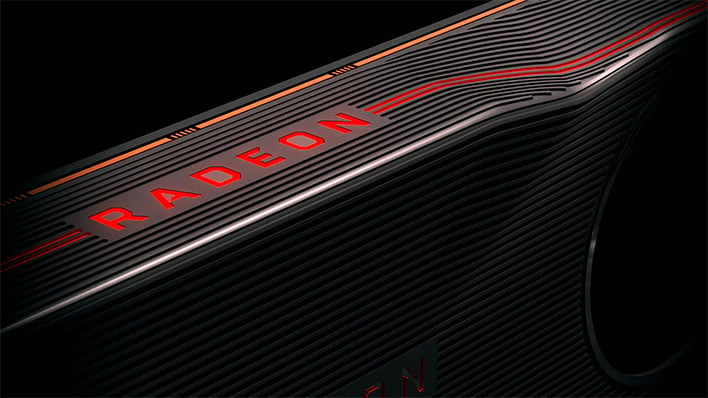 Could this be the year that AMD finally offers up a competitive solution in the high-end graphics space? I'm talking about the very top, where NVIDIA's GeForce RTX 2080 Ti occupies the throne without much threat to its crown. Interestingly enough, a leaked benchmark might possibly point to an unreleased Navi GPU that is faster than NVIDIA's top consumer card. Mayyyyyybe.
Forgetting about NVIDIA's Titan RTX and professional Quadro lineup, the GeForce RTX 2080 Ti is quite simply the best performing graphics card for gaming, with dedicated hardware for real-time ray tracing to boot. It's also expensive, and perhaps not the kind of generational leap in performance some people were expecting, compared to Pascal. But those are topics for a different day.
A user on Reddit has uncovered an intriguing benchmark entry within the OpenVR Benchmark database. Have a gander...

An unnamed Radeon GPU is seen flanked by an engineering sample of AMD's Ryzen 7 4800H processor, the latter of which is a mobile "Renoir" processor. And therein lies the mystery—exactly what GPU are we looking at? Running the OpenVR Benchmark test at 1512x1680 with an HTC Vive MV (90Hz) headset, the GPU averaged 103.32 frames per second. The next best result at the same resolution is 88.10 fps, achieved with a GeForce RTX 2080 Ti.
The mysterious Radeon GPU is a tick over 17 percent faster than NVIDIA's top offering, a not insignificant difference. There is some speculation that this could be the 'big Navi' GPU gamers and enthusiasts have been clamoring for, otherwise known as Navi 20. Incidentally, AMD CEO Dr. Lisa Su touched on the topic during a recent question and answer session with a small group of press.
"I know those on Reddit want a high end Navi! You should expect that we will have a high-end Navi, and that it is important to have it. The discrete graphics market, especially at the high end, is very important to us. So you should expect that we will have a high-end Navi, although I don’t usually comment on unannounced products," Dr. Lisa Su said.
This could just as easily be something else, so let's hold off plucking the performance crown from the GeForce RTX 2080 Ti and handing it over to AMD (not to mention, NVIDIA has its 7-nanometer Ampere GPU waiting in the wings, and it's rumored to deliver a big performance uplift at half the power). Nevertheless, the database entry was intriguing enough to elicit a comment from the benchmark's developer.
"The CPU does seem to be a Ryzen 7 4800H and people generally seem to agree about that. Regarding the GPU, it is definitely some kind of unreleased high end GPU, as being 17 percent above the best performing 2080 Ti is quite a big step...So this benchmark result is very likely done with some unannounced GPU. And since I would consider it very unlikely that someone has access to both an AMD engineering sample CPU and an unannounced NVIDIA GPU, and is allowed to use both in the same system, I think it is most likely that this is an unannounced AMD GPU," the developed stated.
You can read the developer's full statement for proper context, with a concession that this could end up "being something different" and that "no one should feel 100 percent about this." We wholeheartedly agree—that's just the nature of leaks with limited info, as we are dealing with here.
All that said, we're crossing our fingers this ends up being the big Navi GPU everyone's been waiting for. Surpassing (and not just matching) the GeForce RTX 2080 Ti is what enthusiasts are hoping for from AMD at the high end of the GPU spectrum, especially since there is every reason to believe NVIDIA will also have faster offerings by the time Navi 20 makes a retail debut.