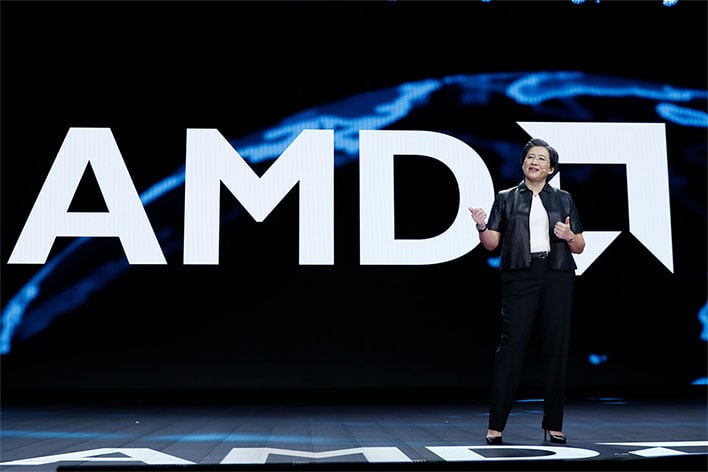 It is fair to say 2019 was a very good year for AMD. It came out with Zen 2, which marked a wholesale shift to 7-nanometer manufacturing, and has positioned itself for long term growth in the CPU and GPU sectors. Now that 2020 is upon us, AMD CEO Dr. Lisa Su shared a bit about what we can expect from the company going forward, during a question and answer session with a small gathering of press.
The round table Q&A session covered a variety of topics, including why AMD's newest round of APUs are still using Vega for the graphics side of the equation, rather than Navi. It is an especially interesting question, since AMD plans its products out several years in advance.
"It's always how we integrate the components at the right time. Certainly the Vega architecture is well known, very well optimized. It was always planned that this would be Zen 2 + Vega. But just to be clear, you will see Navi in our APUs, and those will be coming," Dr. Su said.
Dr. Su touched on this during AMD's press event at CES, claiming Vega has been heavily optimized to deliver a much higher level of performance than previous versions of the GPU architecture. Nevertheless, there will come a time when Navi will be featured on AMD's APUs, though Dr. Su stopped short of saying exactly when that will happen.
Also related to graphics, Dr. Lisa Su confirmed AMD will ship discrete GPUs with support for real-time ray tracing in 2020. This is not unexpected, given that both Sony's PlayStation 5 and Microsoft's Xbox Series X have already been confirmed to feature a custom version of Navi with hardware-level support for ray tracing, and those consoles will arrive by the end of the year.
What's not as clear is when it will arrive for PC. Our hunch is we will see graphics cards based on Navi 20 with ray tracing support by the end of the year as well, though Dr. Lisa Su conceded "it is still very early," and "we need more games and more software and more applications to take advantage" of ray tracing.
It is a bit of a cagey response, though Dr. Lisa Su did also say there will be a high end version of Navi when asked if AMD will have a high end competitor in the discrete graphics market.
"I know those on Reddit want a high end Navi! You should expect that we will have a high-end Navi, and that it is important to have it. The discrete graphics market, especially at the high end, is very important to us. So you should expect that we will have a high-end Navi, although I don’t usually comment on unannounced products," Dr. Lisa Su said.

Lest there was any doubt, Dr. Lisa Su also reiterated Zen 3 is on track to launch this year, adding "we're going to be very aggressive with the CPU roadmap." And it is apparently "doing really well."
The bigger challenge for AMD will be ensuring there is enough inventory to meet demand. Dr. Lisa Su admitted that "wafer supply is tight" at TSMC, which makes it extra important to accurately predict demand.
"When we first launched 3rd Gen Ryzen, there were some areas where we were out of stock at the high-end, particularly on the 3900X and 3950X. Now you’ll see that those CPUs are readily available, through the retailers. So it’s just a matter of when you are early in the cycle, making sure that you can call it correctly," Dr. Lisa Su said.
Dr. Lisa Su had plenty more to say, and if you have a free moment, it's worth hitting the link in the Via field below.