AMD is officially planning to launch its next-generation graphics cards based on its RDNA 3 architecture during an event on November 3, 2022. Scott Herkelman, senior vice president and general manager of AMD's Radeon division, confirmed the imminent launch in a Twitter post with a 'Save the Date' image attached (cropped and displayed above).

"Join us on November 3rd as we launch RDNA 3 to the world! More details to come soon!," Herkelman wrote, with a couple of related hashtags added for good measure.
Herkelman didn't share any other juicy nuggets so we'll have to wait and see what actually materializes. However, the timing of his post is interesting, and no doubt strategic—it comes just hours before NVIDIA is scheduled to deliver a GTC 2022 keynote, in which company CEO Jensen Huang is expected to unveil his firm's next-generation GeForce RTX 40 series.
The timing could also indicate that AMD feels confident it will be a competitive force in the next round, perhaps even taking the performance crown. Or it may simply want to remind folks that it too has next-gen graphics cards on the horizon. 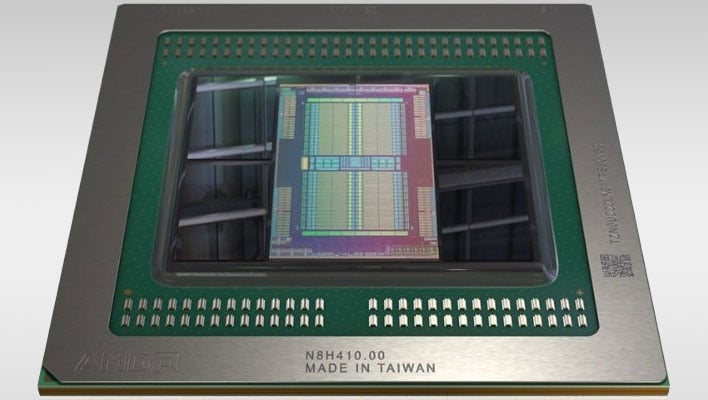 AMD this week also doubled down on RDNA 3 delivering a 50 percent performance-per-watt uplift over RDNA 2. The next-gen GPUs are being manufactured on a 5-nanometer node and boast a rearchitected compute unit, advanced chiplet packaging, next generation Infinity Cache, and an optimized graphics pipeline, AMD says. Beyond those tidbits, official details are in short supply.
Unofficially, RDNA 3 could be poised to hit sky-high clock speeds. In a Twitter post yesterday, prominent leaker @9550pro teased that the Radeon RX 7000 series will hit "almost 4GHz," though they didn't elaborate. It's rumored that NVIDIA's GeForce RTX 4090 will have a default 450W TGP with a configurable (via BIOS) TGP of 660W for added performance. It's within the realm of possibility that AMD could offer something similar to hit a 4GHz clock. Take all that with a grain of salt, though.
It's also rumored that the AMD's flagship Radeon RX 7900 XT will feature 24GB of GDDR6 RAM running at 20Gbps and a 384-bit bus. If so, that would amount to a generous 960GB/s of memory bandwidth.
In any event, there's plenty happening in the GPU space. Intel is getting ready to (hopefully) release its Arc A770 and A750 graphics cards to retail, EVGA has bowed out of the graphics card business leaving the RTX 40 series at the alter, and both AMD and NVIDIA are about to kick off a new generation of graphics. Stay tuned.