The GPU we have been waiting for from AMD is coming sometime later this year. Our collective hope is that AMD's so-called Big Navi GPU based on its second generation Radeon DNA (RDNA 2) architecture will at least bring parity at the top end with the best NVIDIA has to offer, but we will have to wait and see. As for how long, recent comments by AMD suggest Big Navi could arrive around the end of summer, before the Xbox Series X and PlayStation 5 launch in holiday 2020 (November or December).
In other words, PC graphics cards based on RDNA 2 could land on retail shelves before both next-generation game consoles arrive. While this has not been officially confirmed, AMD chief financial officer Devinder Kumar at the very least hinted at such a time frame during the question and answer portion of a recent Bank of America Security Webcast.
"Yeah, you know, on the GPU side, we are really taking the same approach to developing, deploying, and delivering a multi-generation roadmap for GPUs that we took on the CPU side. We have the world's first 7-nanometer GPUs for the data center. You know, one of the things on the gaming side is there's a lot of excitement for Navi 2, or what our fans have dubbed as the Big Navi. This will be our first RDNA 2 base product. Big Navi is a halo product, enthusiasts love to buy the best, and we are certainly working on giving them the best," Kumar said. 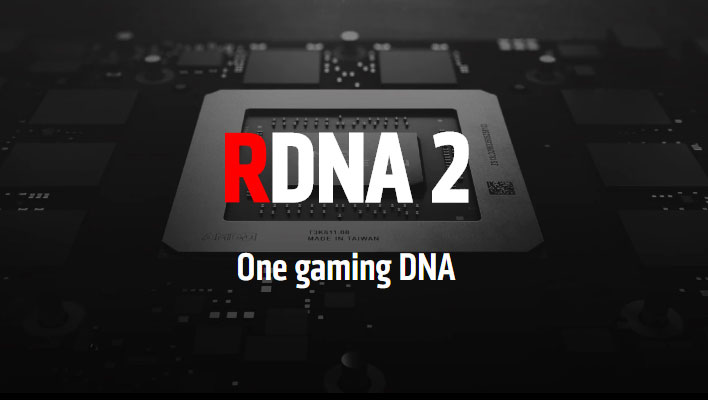 Let's break this down. The term 'Big Navi' is often used in the enthusiast community in reference to what is essentially Navi 21. From what (think) we now about Navi 21, it is a sizeable slice of silicon that will find its way into AMD's higher end RDNA 2 graphics cards for the PC. Or at least the top iteration will—rumor has it there will be a Navi 21 XTX, XT, XL, and XE.
Big Navi has not been used to describe the GPU inside the Xbox Series X or PlayStation 5, both of which will sport custom silicon featuring Zen 2 CPU cores and RDNA 2 graphics. So when Kumar says Big Navi will be AMD's "first RDNA 2 base product," he is seemingly suggesting it will release before either next-gen game console. Big Navi will be the foundation from which AMD builds its next round of GPUs, both for PC and console.

"With the RDNA 2 architecture goes through the entire stack, it will go from mainstream GPUs all the way up to the enthusiasts and then the architecture also goes into the game console products."
Since the Xbox Series X and PS5 will arrive in either November or December ("holiday 2020" leaves a wide window), we could conceivably see Big Navi arrive on PC in October or even September. Any earlier seems like a stretch, though only AMD knows for sure.
Meanwhile, it's expected NVIDIA will roll out Ampere on the consumer side, after already introducing its next-gen GPU architecture for the high performance computing (HPC) market. And of course Intel is working on releasing its first discrete GPU of the modern era. In other words, buckle up folks, we are in for a wild ride.