If you've been following AMD Ryzen CPU news, you'll already be familiar with the names Phoenix and Raphael. If you haven't been tracking them, these are the two codenames you need to keep an eye on. Phoenix is by all accounts the name for AMD's next-generation APUs, while Raphael is rumored to be the codename for AMD's first Socket AM5 chips.

The latest information from Twitter leaker Greymon55 seems to confirm earlier rumors that Raphael will be finding its way to laptops, too. We already expected Phoenix to come in laptop form, and Greymon55 seems to confirm what we already know: the APUs, fabricated on TSMC's 5nm process, will come with up to eight Zen 4 CPU cores, GPUs based on RDNA 2, and thermal design power (TDP) specs under 40 Watts.


Intel is charging hard at AMD's competition with its Alder Lake CPUs, which sport impressive core counts—at least, as long as you ignore that some of the cores aren't as fast as the others. It's likely that future revisions to Alder Lake's hybrid design will stuff in even more cores. To combat Intel's forthcoming high-core-count laptop chips, it seems that Raphael will make its way to laptops as well, and that the laptop version won't sacrifice the desktop's peak core count of a full complement of sixteen Zen 4 cores. 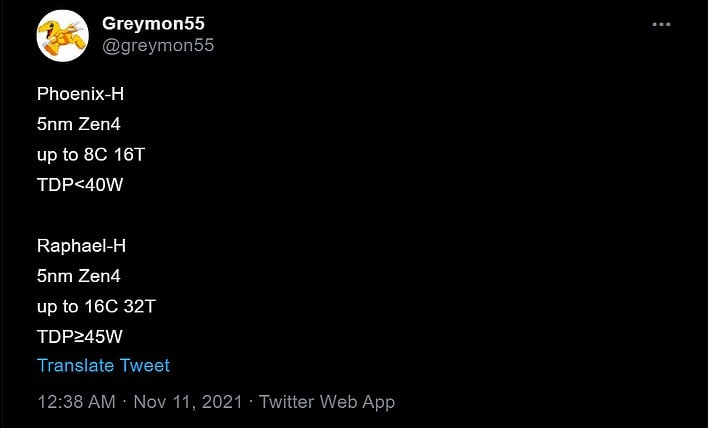 Greymon55 expects the TDP for these chips to be "≥45W," which is a polite way of saying "probably more than 45 watts." That's pretty thirsty for a laptop CPU, but then, a sixteen-core Zen 4 chip is monstrous for a laptop processor. Heck, we remember when stuffing eight cores in a laptop required an absurdly gigantic chassis.

For reference, AMD's current APUs in the Ryzen 5000 series are known internally as Cezanne. Those chips sport Zen 3 cores and GPUs based on the venerable Vega architecture. Before Zen 4 hits the market, we're expecting chips based on Zen 3+. That'll be the so-called "Zen 3D" with stacked V-Cache for desktops, and then Rembrandt for APUs—with Zen 3+ CPUs and Navi 2 graphics. These parts are expected to be branded as Ryzen 6000, which puts Phoenix and Raphael in Ryzen 7000 territory, assuming AMD continues its current marketing trend.

Raphael is rumored to be a bit different from the extant Zen parts, because it's a full-fat Zen 4 CPU that also includes a GPU of some capbility. Rumormongers have the GPU in Raphael to be relatively puny, which makes it rather similar to Intel's strategy of including a basic GPU even in its fastest desktop and laptop processors. That makes sense even in laptops, where a high-end, 16-core CPU is likely to be paired with a powerful discrete GPU.

Unfortunately, as fascinating as these processors sound, we probably won't be getting our hands on them any time soon. Greymon55 says that these are "absolutely" 2023 products. That puts them far afield from Intel's current Alder Lake CPUs, and likely even beyond its future Raptor Lake processors, and perhaps in direct competition with the 14th-generation Meteor Lake parts.