Little by little, online leakers are revealing AMD's supposed processor roadmap for its various product lines, including desktop and laptop chips. None of the leaked information is actually confirmed—AMD has not talked a whole lot about its future products—but it is interesting to analyze all the same. Speaking of which, the latest leak points to some Zen 4 details.
In regards to Zen 4, AMD has not been completely mum on the subject, having acknowledged the upcoming CPU architecture on official roadmaps. Unless there is a change of plans (unlikely at this stage), Zen 4 will be built on a 5-nanometer manufacturing process.
AMD has also acknowledged Zen 4 in public comments. For example, The Street last year interviewed AMD executive vice president Rick Bergman and asked specifically if Zen 4 would be able to deliver the same 19 percent IPC uplift we've seen with Zen 3.
"[Given] the maturity of the x86 architecture now, the answer has to be, kind of, all of the above," said Bergman. "Zen 4 is going to have a similar long list of things, where you look at everything from the caches, to the branch prediction, [to] the number of gates in the execution pipeline. Everything is scrutinized to squeeze more performance out."
If we shift over to the leaks and rumors sector, there is a bit of additional information on Zen 4. Building on a partially leaked roadmap from last August, as well as information put out there by other prominent leakers (including @sepeuwmjh), Twitter user @Olrak29_ shared a more complete picture of what is supposedly to come. Here's a look... 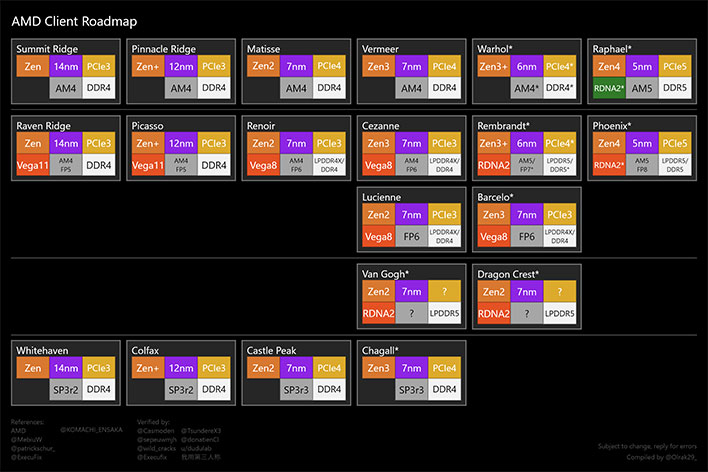 We have covered some of the prior leaks, such as Warhol, which figures to be a refresh (Zen 3+), somewhat similar to when AMD refreshed its Ryzen 3000 series with "XT" chips. But what catches our attention here is Zen 4, otherwise known as Raphael, according to the leaked roadmap.
Assuming the upcoming Zen 3+ refresh gets labeled as the Ryzen 6000 series, then Zen 4 would be comprised of Ryzen 7000 series CPUs. Whatever it ends up being called, the interesting thing to note is the inclusion of onboard Navi 2 graphics.
Unlike Intel, which offers integrated graphics on its consumer CPUs and simply disables them on some of its product lines, AMD's main desktop CPUs lacked onboard graphics altogether (as opposed to disabling them). That is rumored to change with Zen 4.
This would be a potential boon for builders who want to piece together a small form factor (SFF) system without a discrete GPU, or people who otherwise do not want or need the kind of graphics power that a dedicated graphics card delivers. To that end, AMD has provided Ryzen processors with onboard graphics (APUs, essentially), but it's typically a waiting game, as its main desktop CPUs based on its newest chip architecture always launch first.
The roadmap as constructed also highlights a few other tidbits, including support for DDR5 memory and a shift to the PCI Express 5.0 bus. All in all, Zen 4 is shaping up to be a big upgrade over Zen 3/3+.