This Alder Lake Motherboard Doesn't Care If You Rock DDR4 Or DDR5, It Supports Both

Having trouble deciding between DDR5 or DDR4 memory for your Alder Lake desktop build? You're not alone—this motherboard can't decide either. It actually rocks DIMM slots for both types of RAM, and as far as we are aware, it's the only socket LGA 1700 motherboard to swing both ways. This raises the question of what purpose does having both DDR4 and DDR5 memory slots serve?
You can't boot with both types of memory installed at the same time, and probably nor would you want to even if you could. Instead, the only practical use case we can think of is to repurpose your existing DDR4 memory until DDR5 becomes a more attractive proposition, both in terms of faster speeds at lower latency timings, and better pricing and availability. 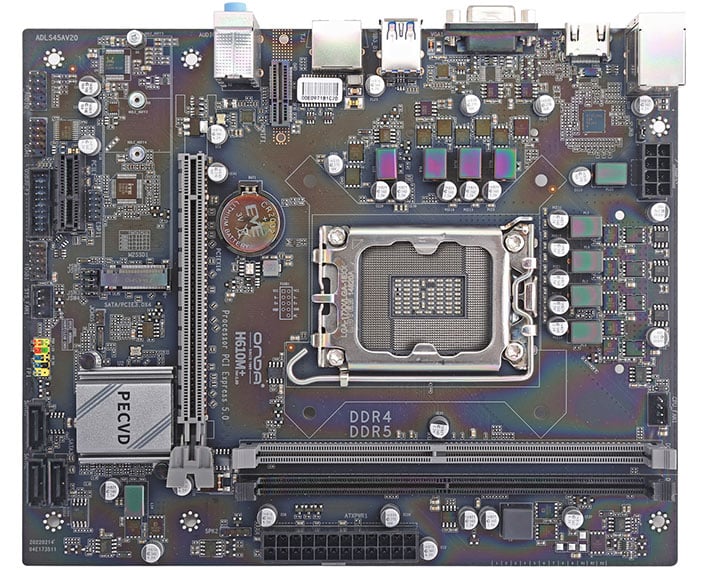 By that same token, you could buy a new stick of DDR4 memory now and swap it out for DDR5 down the line. Either way, this is a sort of 'DDR4 today and DDR5 tomorrow' kind of deal. And of course there are caveats.
Built by Onda and spotted by @momomo_us, this H610M+ (version 1.0) board only provides one of each type of DIMM slot. Therein lies the biggest caveat, as it limits your 12th Gen Intel build to single-channel memory. In some cases, dropping down from dual-channel to single-channel memory can have a significant impact on performance. 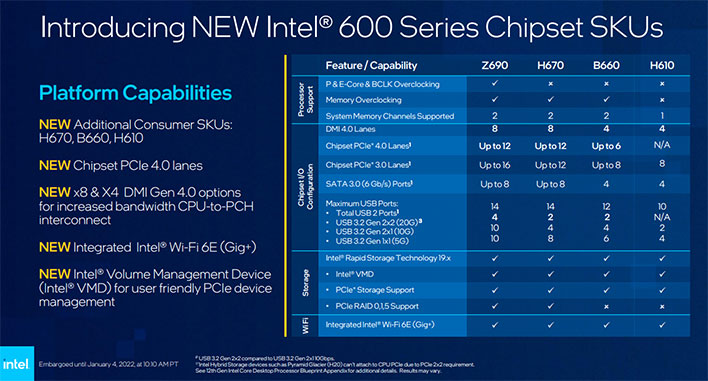 It's also worth noting that, as the model name implies, this is based on Intel's H610 chipset. That's the entry-level chipset in the 600 series (behind the B660, H670, and Z690) and comes with some feature compromises, such as no support for PCI Express 4.0.
What about dual-channel memory support on H610? Intel's 600-series chipset slide led to some confusion over the matter. Intel later clarified that H610 does support two memory channels, just with one DIMM per channel. So in other words, the H610 chipset enables board makers to tap into all the bandwidth that dual-channel memory provides, but at half the top capacity as the rest of the 600-series.
In this case, users can install up to 32GB of DDR4-3200 or DDR5-4800 memory. Other features include three SATA 6Gbps ports, an M.2 slot for a Wi-Fi adapter, a PCIe 5.0 x16 slot and PCIe x1 slot, and various external I/O ports (USB 3.0 and 2.0, PS/2 combo port, HDMI and VGA, LAN, and audio). This all comes wrapped in a micro-ATX (mATX) form factor.
Pretty wild, though not unprecedented in concept. Back in the day, ASRock embraced two memory standards (DDR2 and DDR3) on the same slab as well, with the same caveat of having to choose one or the other.

As for this modern take on supporting two memory standards, there's a product listing for Onda's H610M+ motherboard, but no mention of price or availability yet.