Intel has just expanded its lineup of Alder Lake desktop processors with nearly two dozen new SKUs spanning its Celeron, Pentium, Core i3, Core i5, and Core i9 product categories. it also unveiled a trio of stock cooling solutions for its latest Alder Lake chips, and added three additional 600 series chipsets, all in an effort to further extend its reach into the mainstream market with its latest-generation CPU architecture.

Now two months later, Intel has added 22 additional SKUs, most of which are split between 65W and 35W offerings. Here's a look at the 65W models, plus a few lower TDP additions... 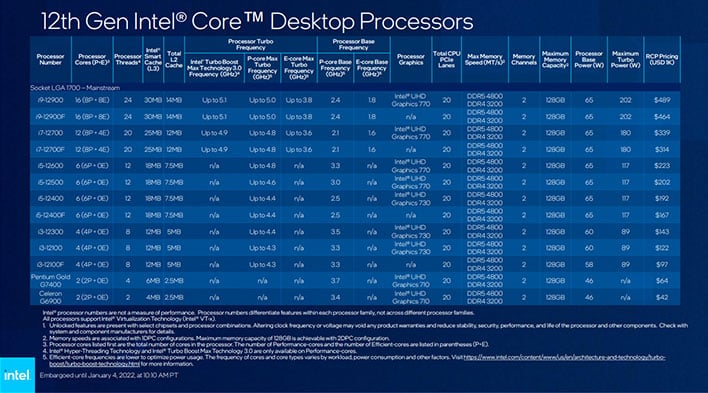 Whereas intel's initial offerings all featured unlocked multipliers for easier overclocking, these latest additions take aim at mainstream users who are not necessarily interested in pushing clocks past their stock speeds. There are still some high-end offerings, though, like the Core i9-12900 and Core i9-12900F, both of which pair eight P-cores with eight E-cores. Those chips can turbo up to 5.1GHz (3.8GHz for the E-cores) and wield 30MB of L3 cache.
Once we get down into Core i5 territory and below, we see the first Alder Lake CPUs to run solo with P-cores. In other words, they eschew the hybrid makeup that we have seen from Intel's Alder Lake stack up until now
The top chip to only incorporate Golden Cove cores (and no Gracemont cores) is the Core i5-12600. It sports a familiar 6-core/12-thread configuration, with a 3.3GHz base clock, up to a 4.8GHz turbo frequency, and 18MB of L3 cache. This chip also has a base 65W TDP and a maximum 117W TDP when the turbo clock kicks in. 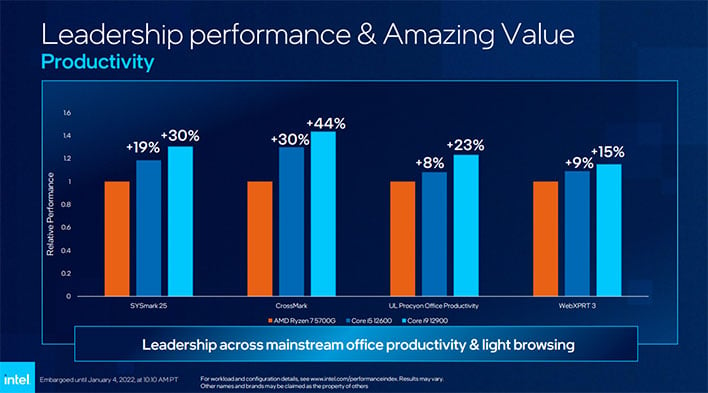 Even without an Gracemont cores thrown into the mix, Intel's expanded Alder Lake lineup promises big performance gains over the previous generation, and of course Intel is quick to point out performance wins over its competitor. According to Intel's own benchmark data, the Core i5-12600 outpaces AMD's Ryzen 7 5700G by up to 30 percent in productivity and light browsing workloads. 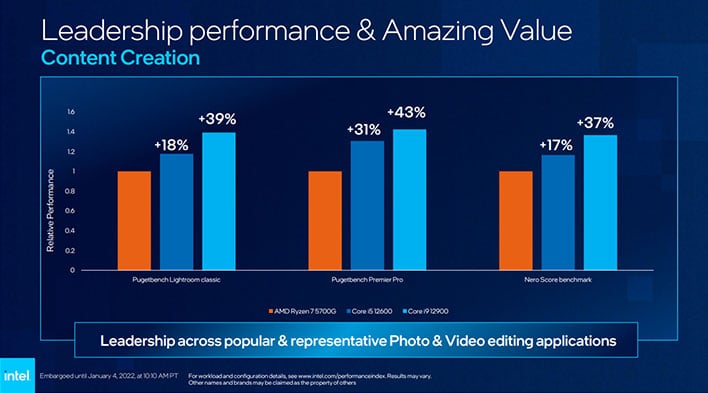 Intel also points to sizable gains in content creation, with the Core i5-12600 offering a purported 31 percent advantage over the Ryzen 7 5700G, as represented by Intel's Pugetbench Premier Pro benchmark run. And those opting for the Core i9-12900 can expect an even bigger performance gap, according to Intel's internal data. 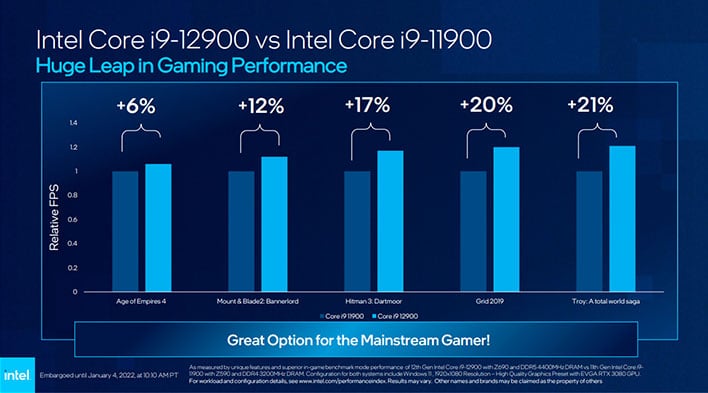 As for gaming, we'll have to wait and see for ourselves how the Core i5-12600 and other lower end Alder Lake SKUs fare. But with regard to the Core i9-12900 and its hybrid makeup, Intel shared another set of benchmarks that showed anywhere from 6-21 percent better performance compared to the Core i9-11900 (Rocket Lake).

Here's a look at the rest of the lineup... 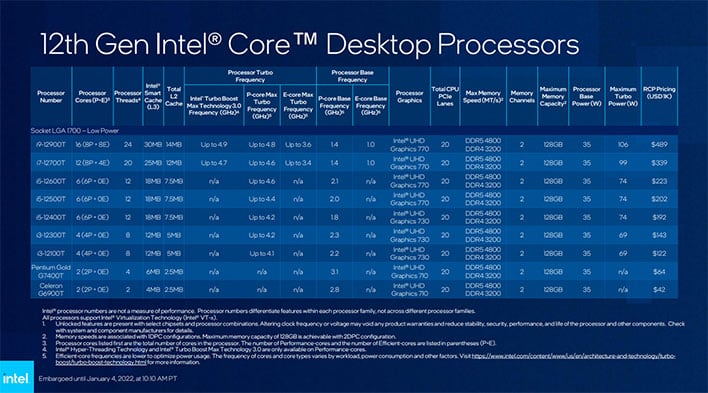 The chart above outlines Intel's "T" models, which trade some clock speed at the upper end for a lower power draw. All nine of these SKUs feature a base 35W TDP, while maximum power draws range from 69W to 106W at the very top.
Only two of these models go the hybrid route with both P-cores and E-cores, those being the 16-core/20-thread Core i9-12900T (8P + 8E) and the 12-core/20-thread Core i7-12700T (12P + 4E). As we saw with the 65W models, Core i5 and below models lack any E-cores (or they've been disabled).
We'll have to wait and see how performance shakes out, but a preliminary evaluation of the specifications suggests these will be intriguing options for mainstream users who want to tap into Alder Lake while skewing towards lower power draws. 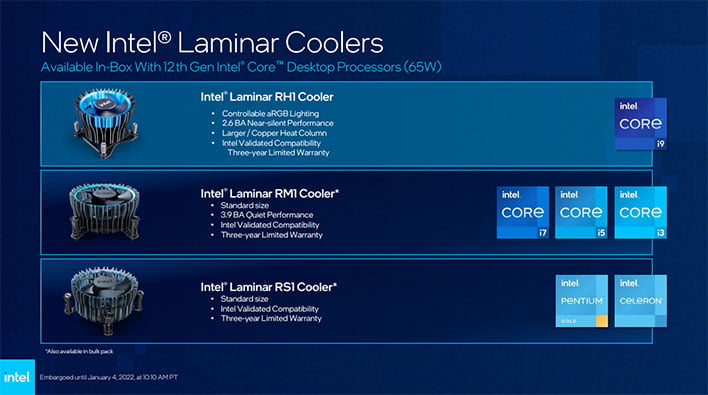 All of Intel's 12th Gen processors that fall into the 65W TDP category will come with one of three new stock cooling solutions: RS1, RM1, and RH1. 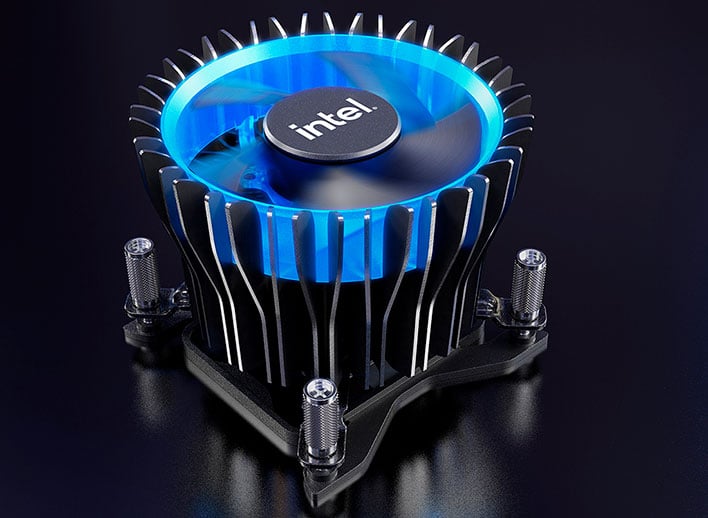 The Laminar RH1 is the burliest of the bunch with a taller design than the other two. It looks like the past leaks were right on the money—today's launch confirms the RH1 sports a larger copper heat column and has customizable RGB lighting around the inner ring at the top. We can also see a metal push-pin design for easy installation. Intel claims the RH1 is nearly silent (just 2.6 BA), and notes it will be bundled with its 65W Core i9 models. 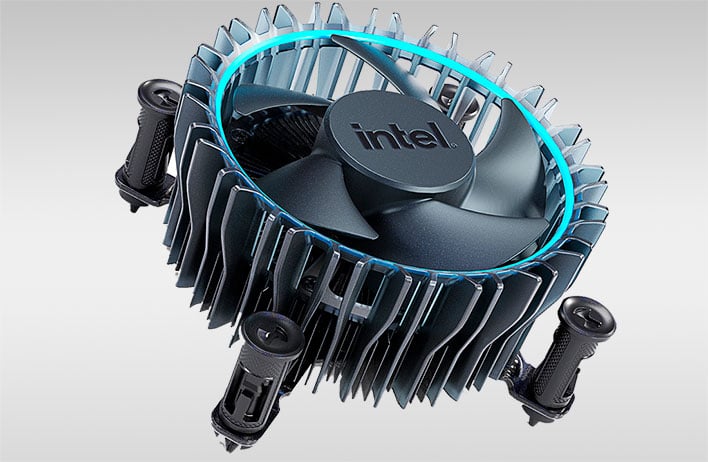 Intel's 65W Core i7, Core i5, and Core i3 processors within the Alder Lake family will come with the RM1 cooler. It features a lower profile design and trades metal push-pins for plastic ones. The leaks got this one partially wrong, in that it doesn't have any RGB lighting, and instead gets its bling from a blue plastic ring and angled fins. According to Intel, this is a quiet cooler as well, at 3.9 BA. 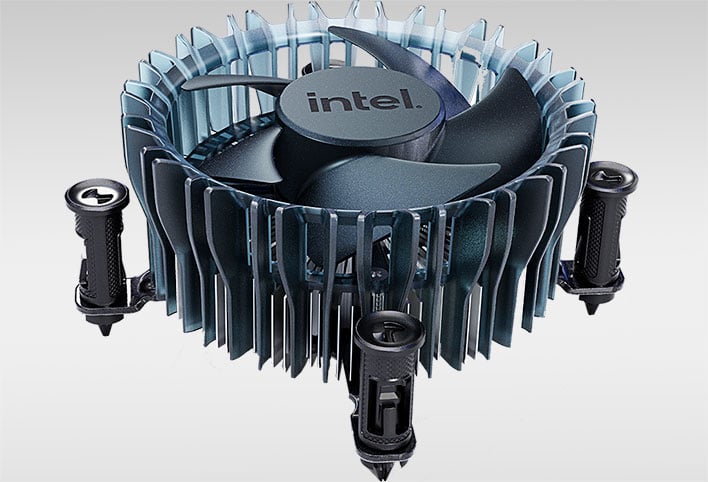 Finally, the Pentium and Celeron chips will come bundled with the RS1 cooler. It looks similar to the RM1, but without the ring bling. It also appears slightly smaller.

Pricing has not yet been revealed, but all these processor options are obviously intended to make Alder Lake more accessible to a wider range of budgets. And to that end, Intel also introduced three new chipsets: H670, B660, and H610. 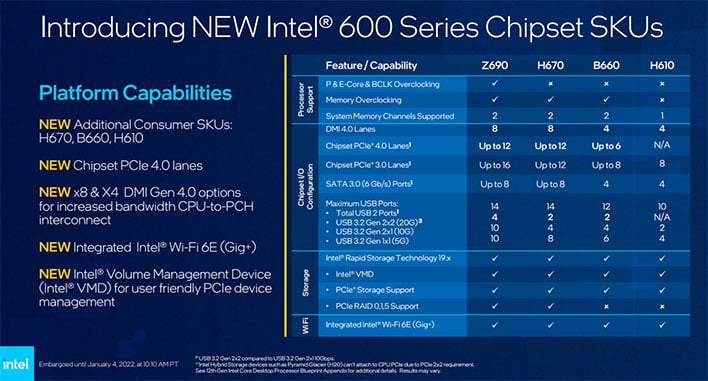 The H670 comes closest to Intel's enthusiast Z690, just without overclocking amenities, four fewer PCIe 3.0 lanes, and fewer USB ports. What about PCIe 5.0? We're told the additional chipsets are technically capable, but have not been officially qualified, hence it's not listed on the spec sheet. We'll have to wait and see in Intel's hardware partners make PCIe 5.0 a bullet point on some motherboard models based on these chipsets.

Just as it was with the H570, the H670 is poised to be an attractive option for enthusiast who want a high-end solution without paying flagship prices. The compromises are relatively narrow, save for the lack of overclocking support.
The B660 and H610, meanwhile, will prop up even more affordable motherboard options for Alder Lake, with varying degrees for feature compromises. The B660, for example, chops the number of PCIe 4 lanes in half and shaves a couple of USB 3.2 Gen 1x1 (5Gbps) ports off the equation, It also lacks PCIe RAID support. And the H610 doesn't offer up any PCIe 4 lanes.
One interesting thing to note is that every 600 series chipsets supports Wi-Fi 6E. If you missed it, check out our 2.5 Geeks episode in which we discussed Wi-Fi 6E and why you should care with Intel's Eric McLaughlin and Bob Grim.
Summed up, this is a big day for Intel and its Alder Lake architecture. The new CPUs and chipsets open up access to a much wider audience. Not just for DIY builds, but also OEMs and boutique system builders, all of which now have a lot more options within the Alder Lake ecosystem.