One of the best features of the PlayStation 5 and Xbox Series X|S has arrived on PC and will eventually pay dividends to owners of fast storage devices. Microsoft's DirectStorage API, announced in 2020, is now shipping as a public software development kit (SDK) so game developers can get busy tapping into storage resources for faster game loads and to build more expansive worlds.
When the PS5 and latest generation Xbox consoles arrived, one of the most touted features was the jump to solid state storage (a long time coming, we might add). But it's not just the inclusion of an SSD that is exciting, it's the underlying storage architecture that enables developers to properly utilize these drives to vastly reduce load times, among other benefits.
Microsoft calls this Velocity Architecture on the Xbox, and the same hyper-fast I/O performance it enables is available on PC via the DirectStorage API, which is basically the same thing. It released as a developer preview last year, and is now available for all.
"Starting today, Windows games can ship with DirectStorage. This public SDK release begins a new era of fast load times and detailed worlds in PC games by allowing developers to more fully utilize the speed of the latest storage devices," Microsoft announced in a blog post.
Microsoft also reiterated that DirectStorage is not exclusive to Windows 11, it's also compatible with Windows 10. In addition, users don't necessarily need to upgrade from a SATA to an NVMe SSD, either. That said, Microsoft recommends both Windows 11 and NVMe storage to "more fully experience the benefits of DirectStorage."
So what exactly does this API do? Let's have a look. 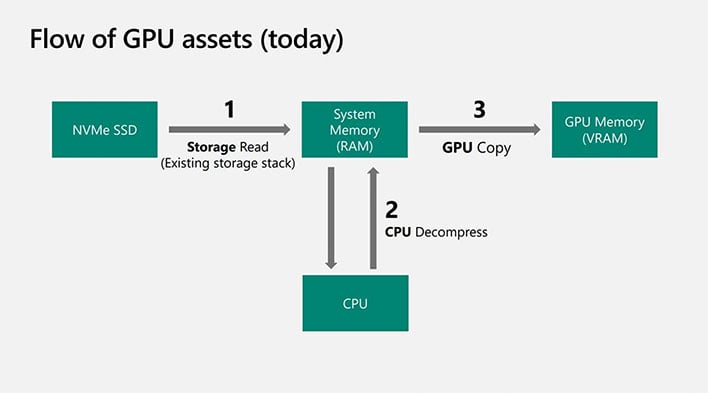 The way things currently work on PC is that Direct3D and the CPU handle data compression from the storage device, which then gets pushed to system memory (RAM). It works, but there's a better way and that is where DirectStorage comes into play. 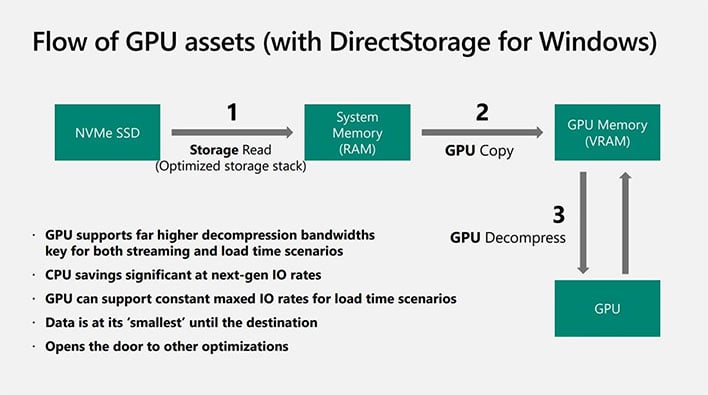 DirectStorage introduces an optimized storage stack that pushes assets to system memory and then directly to the GPU, rather than going through the CPU first. It's a shorter path, to oversimplify things, which results in much faster decompression. In turn, the CPU is free to work on other things, so there's a double benefit to this approach.
There is a caveat, though. The initial implementation of DirectStorage in Windows doesn't include GPU compression, which is the most important part of this whole scheme. So the CPU still has to handle much of the grunt work, albeit with an optimized storage stack (so there are still some benefits here). That's the bad news. The good news? GPU decompression is coming, too.
"This release of DirectStorage provides developers everything they need to move to a new model of IO for their games, and we’re working on even more ways to offload work from the CPU. GPU decompression is next on our roadmap, a feature that will give developers more control over resources and how hardware is leveraged," Microsoft says.
Microsoft also plans to continue optimizing the DirectStorage API, so it will get better over time. Hopefully by the end of the year we'll start to see a few games utilize the API. Luminous Productions already announced that Forspoken will leverage the API when it ships in October, and we'll have to wait and see how many other titles do as well.