It may seem hard to fathom but much faster solid state drives (SSDs) are on the horizon, with sequential read and write speeds on pace to double over today's fastest solutions. In a brief demonstration posted to YouTube, Phison showed off an engineering sample SSD ripping off reads just shy of 12.5GB/s and writes exceeding 10GB/s.
Looking back, the first round of PCIe 4.0 SSDs that arrived on the market settled in with top speeds of around 5GB/s. Then as time went on, Phison and other controller makers released new chips that pushed speeds into 7GB/s territory, with today's fastest drives exceeding that threshold by a few hundred megabytes per second. 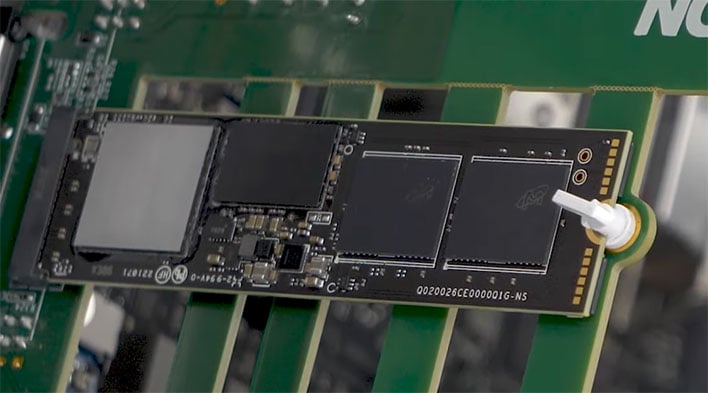 The PCIe 4.0 bus supports speeds of around 2GB/s (slightly less) per lane. Modern M.2 form factor SSDs have largely adopted an NVMe x4 interface (there can be slower SATA models as well), with a theoretical ceiling of 7.88GB/s over PCIe 4.0. We're already close to that upper limit with drives like Adata's XPG S70 Blade pushing 7.4GB/s reads.
Enter PCIe 5.0 and next-gen SSD controllers like the PS5026-E26. Here's a look at it in action...

In the short 42-second video, Phison shows off its PS5026-E26 controller mated to an pre-production SSD equipped with 1TB of 3D triple-level cell (TLC) NAND flash memory from Micron. It starts with a closeup of the drive attached to a board that's installed in a PCIe 5.0 slot, and then pivots to a sped-up benchmark run in CrystalDiskMark.
Here's how it fared... 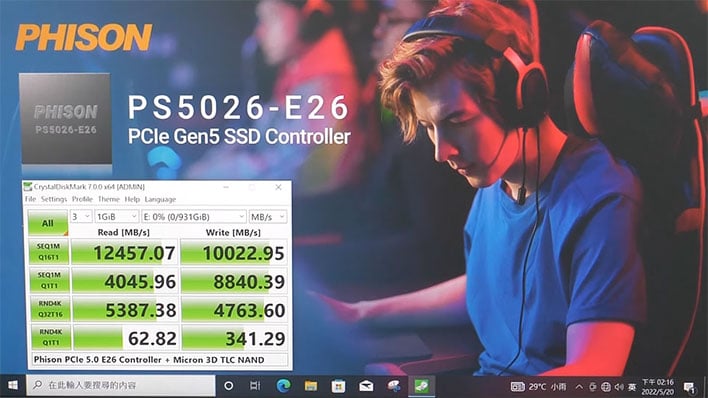 The 1TB drive topped out with a 12,457MB/s sequential read speed and 10,023MB/s sequential write performance, or around 12.5GB/s and 10GB/s, respectively. Those speeds are not quite double that of today's top performing SSDs, but they are significantly faster.
In the video, Phison notes that its controller and drives are built around them are "compatible with two leading chipset platforms." We can take that to mean Intel's Alder Lake and AMD's upcoming Zen 4 platforms, both of which embrace PCIe 5.0. To that end, Phison recently announced a strategic collaboration with AMD and Micron to flesh out a PCIe 5 ecosystem of compatible products.
"We are pleased to announce our cooperative effort with Micron and AMD to advance the technological development of PCIe Gen5 storage offerings, as this validates Phison’s commitment to upholding customer-centric values," said Leo Huang, Sr. Director, Product Marketing, Phison. "The E26 controller enables gamers to compete at the highest level and helps content creators to maximize the overall system performance to increase productivity."
The gaming angle is a little overzealous at the moment, as developers are not yet taking full advantage of the raw speed performance at their disposal. However, there are efforts to push developers in that direction. Both modern generation game consoles—Xbox Series X|S and PlayStation 5—employ high-speed PCIe 4.0 storage, and Microsoft's DirectStorage API for Windows provides a path to better utilize speedy storage.
Even though it will take some time, it's still nice to see companies pushing the envelope, given that storage was once a performance bottleneck (before the advent of SSDs).