Go ahead and mark your calendars, just be sure to use a pencil or an erasable pen (and not permanent market), because it looks as though Intel's upcoming Tiger Lake processors will be arriving on July 27. That is the date a pair of Acer Swift 5 laptops with Tiger Lake hardware are slated to launch, according to a couple of product listings at a Dutch retailer.
We have been hearing about Tiger Lake for a long time now, and even Intel has talked about its successor to Ice Lake. However, as of this writing, Intel has not formally launched its 11th generation Core processors or announced exactly when they will arrive. We are definitely getting close, though, as earlier this week Intel's Ryan Shrout posted a video of a Tiger Lake laptop running Battlefield V on the chip's Xe graphics. And Intel recently offered up a hint, saying Tiger Lake will arrive "in the middle of this year."

"Perks of the job! Took a prototype Tiger Lake system for a spin on Battlefield V to stretch its legs. Impressive thin and light gaming perf with Xe graphics! Early drivers/sw, but it’s the first time I’ve seen this game run like this on integrated gfx. More later this year!," Shrout said.
As it turns out, "later this year" could equate to next month. That's if a couple of product listings at Central Point are any indication. Have a look... 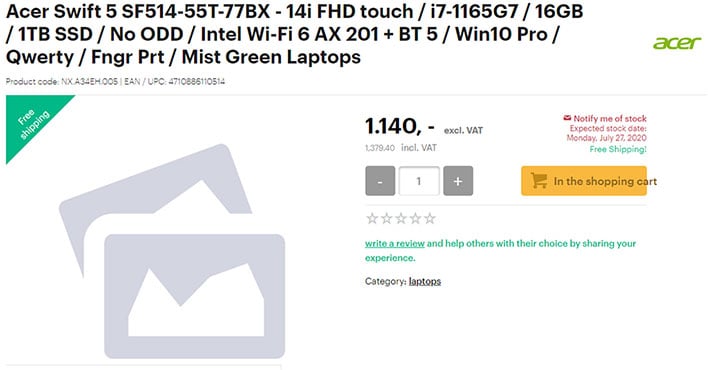 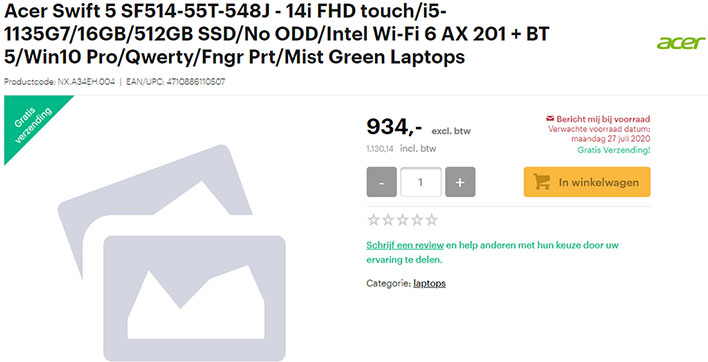 This one is for an Acer Swift 5 with the model number SF514-55T-548J. It is a cheaper configuration at €934 (~$1,044) with a Core i5-1135G7 processor, 16GB of RAM, a 512GB SSD, and the same Wi-Fi 6 + Bluetooth 5 combination. Both laptops are also configured with Windows 10 Pro.
We have seen both the Core i7-1165G7 and Core i5-1135G7 in previous leaks, the latter of which was very recently spotted in a Dell Inspiron 7506 2-in-1 system.
What makes the upcoming launch more interesting than usual is the upgrade to Xe graphics. That is the same architecture that will power Intel's first modern discrete GPUs, and if the benchmark leaks are any indication, it should offer a nice performance bump on the mobile side, compared to Intel's Gen 11 graphics used in Ice Lake.