We still have some waiting to do until we find out if the hype surrounding Intel's upcoming Tiger Lake stack—and particularly its accompanying Xe graphics—is justified. Until then, we are left to the usual sources, which entail rumors and leaked benchmarks. Falling into the latter category, a new 3DMark benchmark entry seemingly bodes well for Intel's Core i7-1165G7.
The Core i7-1165G7 is a part we have seen in past leaks. It falls within Intel's Tiger Lake-U series (not yet released) and will be labeled as an 11th generation Core part, with Xe graphics. It is the Xe graphics that arguably of most interest, because it is the same underlying architecture that will power Intel's eventual discrete graphics cards.
This latest leak was spotted by Twitter user @_rogame, and it shows the Core i7-1165G7 outpacing AMD's recently released Ryzen 7 4800U in 3DMark 11. Have a look... 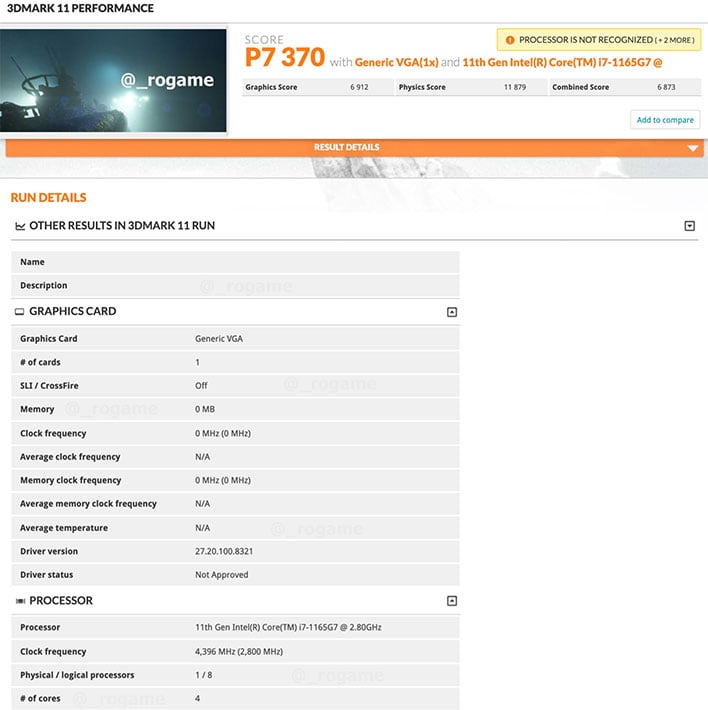 The 11th generation Core i7-1165G7 is a 4-core/8-thread processor with a 2.8GHz base clock, according to past leaks, and what looks to be a 4.4GHz boost clock. It is built on an enhanced 10-nanometer manufacturing process (10nm+) and is one of the parts that will supplant Intel's 10th generation Ice Lake stack.
In the leaked benchmark above, the Core i7-1165G7 posted the following scores:
The Physics and Graphics scores are the ones of primary interest, because they isolate the CPU and GPU, respectively. For context, @_rogame points out that a Ryzen 7 4800U gets a 11,917 Physics score and 6,121 Graphics score.
The Ryzen 7 4800U is an 8-core/16-thread processor with a 1.8GHz base clock and 4.2GHz boost clock, along with 8 Vega compute units (CUs) clocked at 1,750MHz. It's a burly chip in the low power space for thin and light laptops.
Assuming all of these numbers are accurate, the Core i7-1165G7 comes out just slightly behind in the Physics test (a near-tie), and impressively ahead in the Graphics test. Or as the leaker puts it, "Tiger Lake is showing some amazing numbers."
The caveat (beyond the usual disclaimer surrounding leaked data) is that 3DMark 11 is a decade-old benchmark. It is not demanding by today's standards, so we would caution against getting too excited about these figures. We also do not know what the TPD was set at on the Ryzen part—it has a default 15W TDP, but is configurable to 25W.
Still, as tempered as we must be, this is certainly better (for Intel) than seeing a leaked 3DMark 11 benchmark run with lower scores for the Core i7-1165G7. It is also cause to be cautiously optimistic (emphasis on cautiously) about Intel's Xe graphics architecture.